These two welcome figures by Leonard Wells were carved on-site at Earl Marriott Secondary School in collaboration with the students. 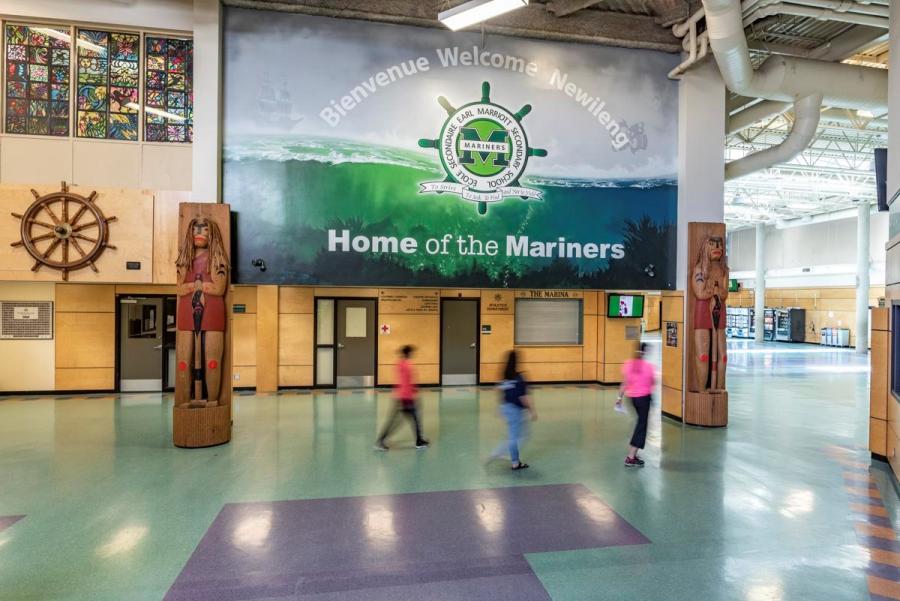 Artist Leonard Wells describes these 13-foot figures as welcome posts, saying “a welcome post stands in front of a Salish longhouse [and] welcomes people into your house.” Located in the lobby of Earl Marriott Secondary School, these welcome figures greet guests, students, and faculty of the facility. The figures are male and female (as identified by their different clothing styles) and both hold their paddles upright in a sign of welcome. On their paddles, the eagle, associated with wisdom, oversees all.

The figures are kw’enalien (pronounced “sen’alien” with an extended “a” sound), which is historically the head paddler of the canoe for the Semiahmoo people of the bay off Point Roberts. Traditionally, the kw’enalien, or reefnet captain, pulled up the net of fish, welcomed them aboard his canoe, and gave thanks to them for providing sustenance.

Wells chose this theme for the welcome posts because of Earl Marriot Secondary School’s association with mariner themes of travelling on water. The school’s sports teams are also called the Mariners. The poles were carved on-site with the collaboration of students. Wells hopes the artwork will leave a true legacy of respect, connection, and commitment between the Semiahmoo People and the Earl Marriott Community.

Leonard Wells is a member of the Semiahmoo First Nation. He carves jewellery, masks, rattles, bowls, as well as monumental sculptures. He apprenticed with Robert Davidson (Haida) and has collaborated with Susan Point (Musqueam/Coast Salish).

His other artworks in the City of Surrey include Under the Double Eagle and Elder Moon, Eagle and Salmon, and Welcoming You.