This whimsical, multi-part sculpture in City Centre tells a story of connections, meaning-making, and imagination. 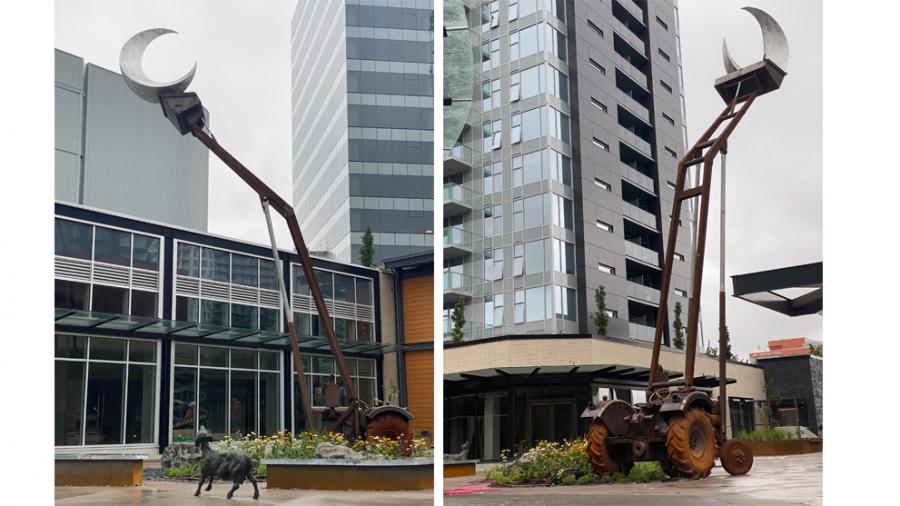 Made of bronze, Moon Harvest introduces play and whimsy into the development around King George SkyTrain station. Although its focal elements such as the tractor, moon, and lamb sculptures are positioned deep within the complex, the secondary interventions such as tractor tracks and a fox watching from a distance extend the artwork throughout the entire pedestrian area.

This artwork celebrates stories told throughout the ages. Whether its origin is farm or factory, a sculptor’s hands or a digital code, the fingerprints of process reveal a human history of thought and action. Here is a fable, written in the physical language of materials and the processes by which matter gets rendered. This is a story that links the fertile soil, buried beneath our feet, to the expanse of space that has forever seeded our imaginations. In-between is a tale of humans and our environment, of our fellow creatures, our tools, our aspirations, and the stories we use to harvest meaning.

Maskull Lasserre's drawings and sculptures explore the unexpected potential of the everyday by inducing strangeness in the familiar and provoking uncertainty in the expected. Each work is developed as a model to mediate the translation of experience between matter and mind. His work appears on Canadian coinage and is represented in collections in Canada, the United States, and Europe including those of the Montreal Museum of Fine Art, the Musée National des Beaux-arts du Québec, and the Canadian War Museum. He has completed several public art commissions and has taught sessionally at Concordia, York, and Emily Carr universities, as well as at the California College of Art. He now works from a studio in Squamish, British Columbia.