Suggested age: 14+ for adult content and some strong language. 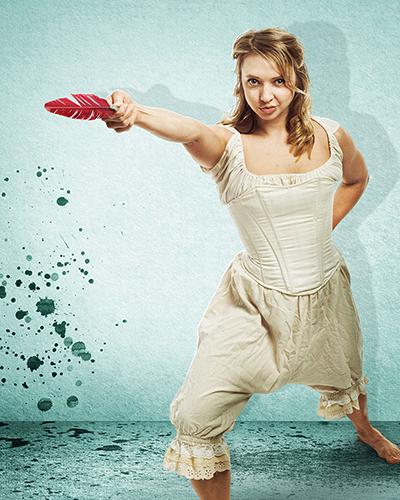 Juliet: A Revenge Comedy is laugh-out-loud, must-see theatre! This fast-paced show follows the story of Juliet Capulet, one of theatre’s most iconic characters and takes the audience on a whole new adventure. For although Juliet is one of world’s most well-known characters, she is also the one with the least free will. Not only is she a child, a woman, and the literary embodiment of love, she is in someone else’s play—a man’s play.

In this energetic production, Juliet tears herself from the fabric of the narrative and exits the theatre determined to write her own story. Wandering through the canon of Shakespeare’s greatest plays, she encounters other renowned female characters (Lady Macbeth, Ophelia, Cleopatra, and Miranda) and recruits this team of kick-ass women to confront Shakespeare.

This exceedingly witty show breathes new life into Shakespeare’s well-loved classics and is certain to be an entertaining evening for all!

“The interactions between Pokoradi and Mackie veer between classic Shakespeare and saucy modern-day dialogue, keeping audiences in stitches from beginning to end of the 60-minute production. The taut writing, sparse props and sound effects are bolstered by fantastic performances, which serve to ratchet up the laughs from start to finish.”  ★★★★1/2 — Winnipeg Free Press

Monster Theatre creates original plays that challenge preconceptions, excite imaginations and embody the way of the Monster: strange, twisted, and bizarre on the outside, but always with a noble heart.

Our process puts story first by adapting universal stories to make them relevant for our specific time and place in the world, or re-imagining history with impeccable research and utter irreverence. Our unique brand of theatre applies the philosophy and techniques of improvisation during both the creation process and in performance, the results are fast-paced, physical, loose, cerebral, and often, but not always, comedic.

Monster Theatre produces work that engages the hearts, brains, and guts of all audiences; comedies that excite intellectuals, histories that shock teenagers, and theatre for young audiences that makes adults roll on the floor laughing.

Pippa Mackie is an award-winning actor, playwright, director, and producer. Since graduating from the National Theatre School of Canada, Pippa has worked as an actor with the Arts Club, Gateway Theatre, Belfry Theatre, Pi Theatre, Rumble Theatre, Greenthumb theatre, Theatre Replacement and many more.

A select number of her film/tv credits include Supernatural (CW), Van Helsing (Sci-Fi), Hell on Wheels (AMC), Roadies (Showtime), and supporting lead roles in feature films #Roxy and Christmas Solo. In 2019, Pippa was nominated for a Canadian Comedy Award ‘Best Performance in a Feature’ for her role as ‘Bronwyn’ in Feature Film #Roxy.

As a playwright, Pippa’s work has been performed on stages and at festivals across Canada. Notable writing credits include: The Progressive Polygamists co-written with Emmelia Gordon which earned two Pick-of-the-Fringe awards and toured Canada for four years; Juliet: A Revenge Comedy co-written with Monster Theatre’s Ryan Gladstone; audio-drama Starman produced by Sound the Alarm 2021; and Hurricane Mona, which was first created as part of the Arts Club Theatre’s Emerging Playwrights Unit.

Ryan is currently working as a writer, director, actor, teacher, and improviser in Vancouver. Ryan is happily married to the beautiful and talented Michelle Field, and they have two children Felix and Beatrix.

Carly is a collaborative creator, multidisciplinary artist, clown, and scrap collector who trusts her goosebumps. As a theatre-maker, Carly has worked in various capacities with Theatre Replacement, Caravan Farm Theatre, The Chop, and Hardline Productions and has toured the country with sold-out runs on the Canadian Fringe Circuit.

Carly is an artistic associate with Monster Theatre, an improviser with Blind Tiger Comedy, a Jessie Richardson Award nominee, and a graduate of Studio 58. As artist-in-residence with the incredible Hammock Residency, she recently showed her textile art at the James Black Gallery in so-called Vancouver.

Currently, she is studying to become an ASL-English interpreter and relishing every minute. In her spare time, she sews messily, sleeps deeply, and laughs loudly.