Pay What You Want / Suggested Price $15

Take an imagination vacation, and delight in the magical world of a storytelling master. Kentucky comedic storyteller Paul Strickland makes meticulously hand-crafted lies (for your entertainment!) and his wonderous word-play will have you beaming with joy. Drawing on the tall tale traditions of his deep south upbringing, Paul takes you on hilariously impossible journeys filled with such whimsy and delight, that you will wish they were true!

“Through Strickland's pitch perfect storytelling and verbal acrobatics (oh boy, can this man spin a yarn), we're transported to a magical place where common sense may be in short supply, but wisdom abounds.” – CBC (2015) 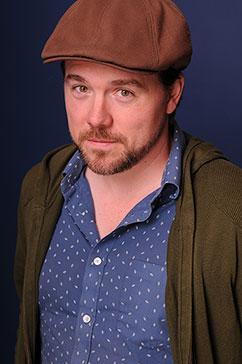 Paul Strickland's collections of stories have won "Best of Fest" honours on 13 different occasions at Fringe Theatre Festivals across the U.S. and in Canada. He was an Exchange Place Teller at the National Storytelling Festival in 2018 and in November of 2018 he made his New York stage debut Off-Broadway at the SoHo Playhouse, with his shadow and flashlight ghost story play 13 Dead Dreams of Eugene.

He was a featured teller at the Timpanogos Storytelling Festival in September of 2020 and will be a featured teller at several upcoming events, including the Cave Run Storytelling Festival, in September 2021. Paul has hours of unique family friendly stories in his repertoire, and he has told stories in every imaginable environment, from comedy clubs to elementary and middle schools, corporate events, and even two prisons—where he was NOT an inmate at the time. Selections from his comedy performance Levels of Difficulty can be heard regularly on SiriusXM radio.