The Re-enactors, Linda Szentes & The Quarantettes

Join us in Bear Creek Park for a POP! Summer Stroll. Throughout the park, in different locations you will be treated to a variety of performances. Each show station hosts a micro-performance that lasts approximately 10–15 minutes before you stroll your way to the thirty-minute grand finale. 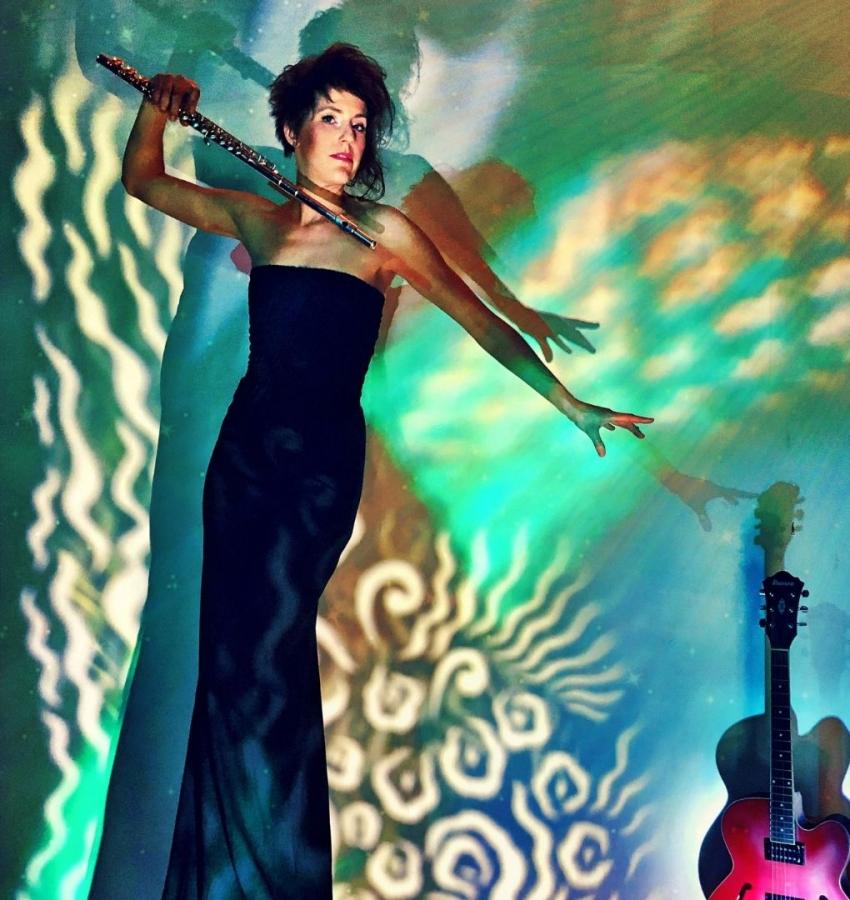 Stop by Devon More’s outdoor musical oasis where she will custom build you a one-woman symphony to suit whatever mood you’re in. Searching for a song about love? For wanderlust? Maybe a song for REVOLUTION? Using a unique arsenal of instruments, and a loop station to live-record each layer of the musical arrangement, Devon More will create a unique song just for you.

Are you sure you’re in Bear Creek Park? Or are you on Safari? Join dreamers, clowns and artists, Melissa and Tamara a.k.a Dreamtime Safari as they hunt for portals into the dreamworld in the wilds of Bear Creek Park. Bring your imagination though, as these portals can only be seen when you hone your magical sight. Are you ready for adventure? 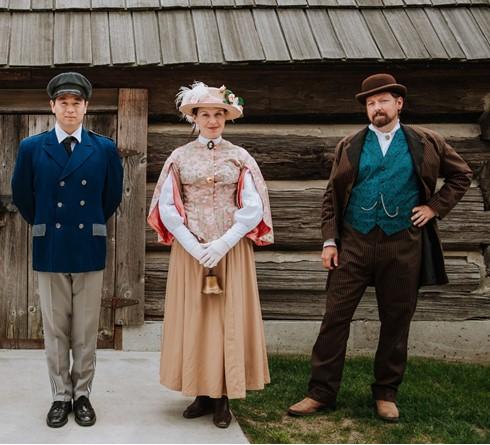 Take a stroll down memory lane with Surrey’s very own Re-enactors. With a focus on the period of 1872 to 1964, visit with Mary Jane Shannon, Eric Anderson, and Zennosuke Inouye in Bear Creek Park, as they picnic together and share stories from their lives and adventures around British Columbia, across the world, and throughout the land that would become the community of Surrey. 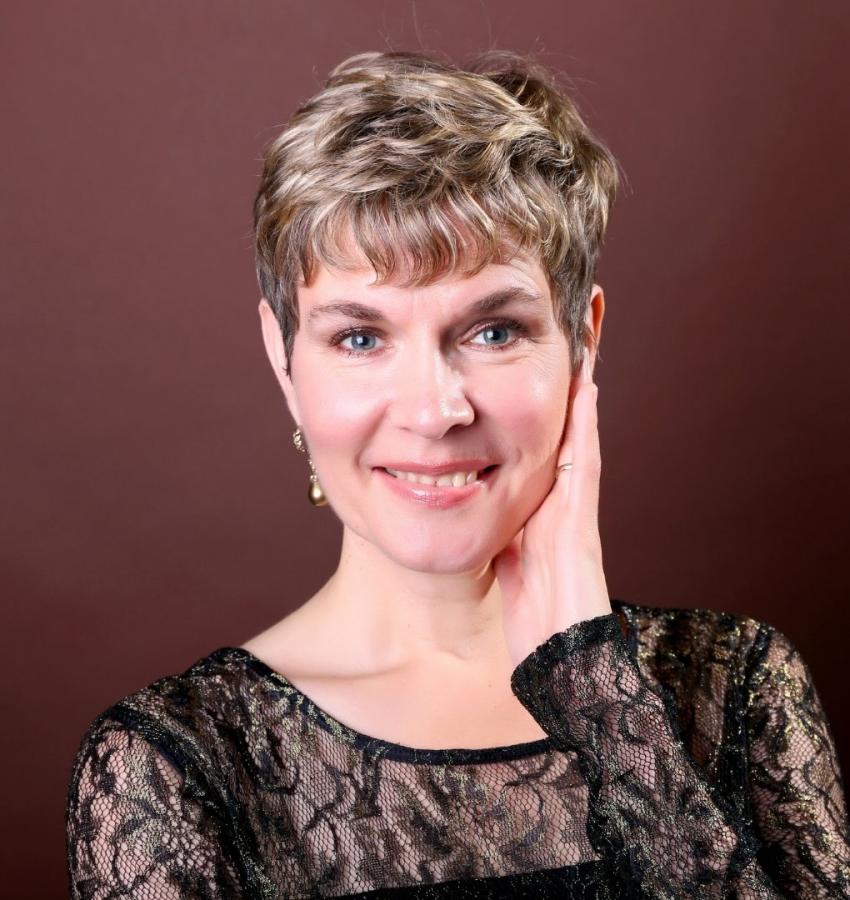 Fancy hearing some piano in the park? How delightful! Linda Szentes will treat POP! Summer strollers to a diverse set list; from pop songs from the ‘30s and ‘40s to songs from Abba and The Beatles, Linda has all generations of music lovers covered! Inspired by nature and summer, Linda also composed a tune especially for Surrey Strolls called “Himawari Song” (Himawari means sunflower in Japanese). 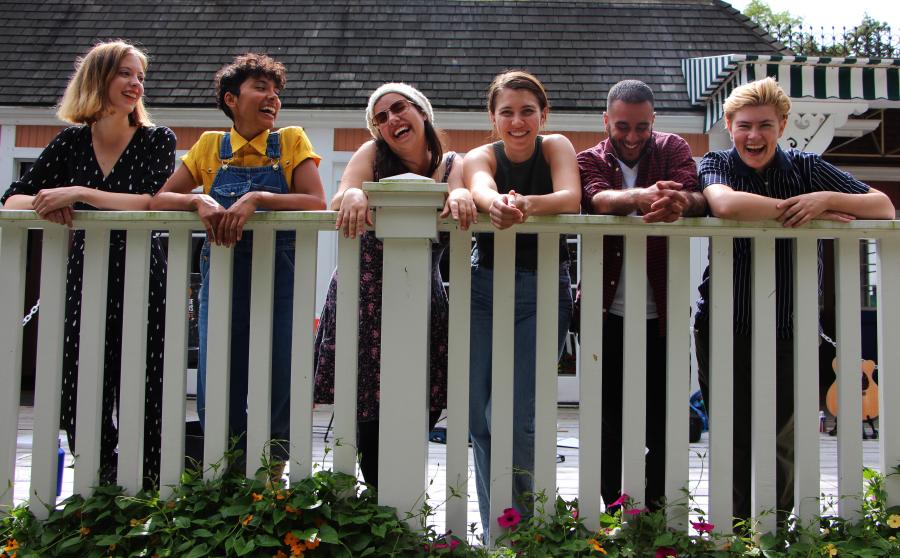 For the grand POP! Summer stroll finale enjoy an upbeat performance from the Quarantettes. This lively group of musicians will serenade you with original Quarantettes songs filled with happy harmonies, perfect poetry, all accompanied by the acoustic musical delights of the guitar, violin, ukulele, percussion, and accordion.

This show loaded with variety is guaranteed to fill your happy cup. Get your tickets today!

When you explore Bear Creek Park, you'll find the focal point for the arts at the Surrey Arts Centre, the cooling off point for the summer at the outdoor pool and waterpark, and the Bear Creek Miniature Train. In addition to a large playground, Bear Creek features football and soccer fields, a running track, a new fenced-in dog off-leash area, and a skatepark to practice your skills. Also find outdoor fitness equipment to use for cardio and strength training. You can also spend time wandering along the nature trails and walking paths. Just a short walk down from the trail, catch a glimpse of spawning salmon or trout!

Devon More is a singer-songwriter and multi-instrumental musician with a slam poet's soul.  She pairs chords with commentary in signature songs with infectious melodies and insightful lyrics.  An award-winning playwright and genre-bending performance artist, Devon tours nationally with her critically acclaimed 'sonic storytelling' spectacles. She has performed her solo shows at fringe festivals in Calgary, Edmonton, Montreal, Nanaimo, Ottawa, Regina, Toronto, Vancouver, and Winnipeg, as well as internationally. She grew up in ʃəˈhwɛpəm (Secwépemc) territory and is now privileged to live and work as a guest on the traditional, ancestral and unceded Coast Salish territories of the xʷməθkʷəy̓əm (Musqueam), Sḵwx̱wú7mesh (Squamish), səl̓ilwətaɁɬ (Tsleil-Waututh), and qiqéyt (Qayqayt) First Nations.

Dreamtime Safari is local performers, Tamara Unroe and Melissa Aston. Tamara studied Visual Art at the Emily Carr Institute of Art and Design (Vancouver), and the Nova Scotia College of Art and Design, rod puppetry with Sandglass Theatre (Vermont), and shadow puppetry with Larry Reed of Shadowlight Productions (San Francisco). After graduating from school, Tamara was based for 12 years in Vancouver, BC, where she created her own shadow puppet work, toured with stilt dancing troupe Mortal Coil, and collaborated with a variety of puppeteers, artists, dancers, animators, musicians, and circus performers. Melissa brings 20 years’ experience to the U.S. and Canadian stage, circus ring, and hospital. As the sole female clown in the historic Ringling Brothers Barnum and Bailey Circus, she toured the U.S. on a circus train. Melissa studied modern and classic circus clowning under Jeff Razz, at the renowned Clown Conservatory, in San Francisco, CA.  She continued her studies, diving into character, clown, and Pochinko mask work with John Turner of Mump and Smoot, and Ian Wallace, co-founder of the Canadian Pochinko Clown Technique. Melissa further explored Modern clown with Mooky Cornish of Cirque Du Soleil, and Deanna Fleysher​ of Butt Kapinski fame. Whether roving through the crowds at a festival, connecting one on one at BC Children’s Hospital, or whooping it up in her stage show, Cosmo’s Pop-Up Circus, Melissa brings a blend of foolishness, warmth, and levity to all her interactions.

The Re-enactors are a professional, award-winning heritage re-enactment troupe that delights crowds with authentic and intriguing stories from Surrey’s past. Performances are lively, educational, and include memorable and humorous audience interactions.

Linda Szentes is an accomplished singer and pianist who is very excited to play her first gig for Surrey Civic Theatres. Linda first started singing and playing as a teenager when she was part of a Vaudeville summer show in her native Burnaby, BC. She earned her degree in Music from UBC and during her career sang professionally in choirs as well as conducting seniors’ choirs. Linda developed a love for jazz later in life after she took lessons from the great Canadian jazz pianist, Bob Murphy. In 2016 she formed the jazz combo Linda Szentes and Jazzlinks, where she sings, leads, and arranges for the group. Jazzlinks has performed twice in the Fort Langley Jazz Festival, at the new Delta Arts Centre, as well as private gigs in restaurants, hotels, and Jazz Vespers services.

The Quarantettes are a six-person acoustic ensemble. Performing mostly original music set to poetic text. Each song is a poem, written by a different female or non-binary poet from the past and present, and is set to music composed by Mishelle Cuttler and Molly Mackinnon. With deep poetic imagery, rich harmonies, guitar, violin, ukulele, percussion, and accordion, each song is a tantalizing folk music experience invoking images of home, nature, and the sublime.