The holiday classic you love brought to life in a way you never imagined possible!

Patrons will be required to show proof of vaccination and government ID to enter Surrey Civic Theatres. To keep your visit safe, masks must be worn by patrons born in 2016 or earlier (5+), regardless of vaccination status.

Praised by the CBC as “Pure magic” and the Globe and Mail as “Powerful, surprising and moving,” acclaimed theatrical imagineers the WONDERHEADS present their delightfully captivating reimagining of Charles Dickens’ A Christmas Carol, with giant masks, whimsical puppets, and wondrous theatrical invention. A feast for the eyes, ears, heart and funny bone, this astonishing production features larger than life characters, glowing ghosts, and 10-foot-tall puppets—to name just a few of the treats in store for audiences as they are whisked away with Ebenezer Scrooge on his magical Christmas Eve adventure. Prepare to laugh, cry, and be utterly enchanted this holiday season!

“If Pixar ever decides to go into the theatre business, they better call Wonderheads first.” ★★★★★ Calgary Herald 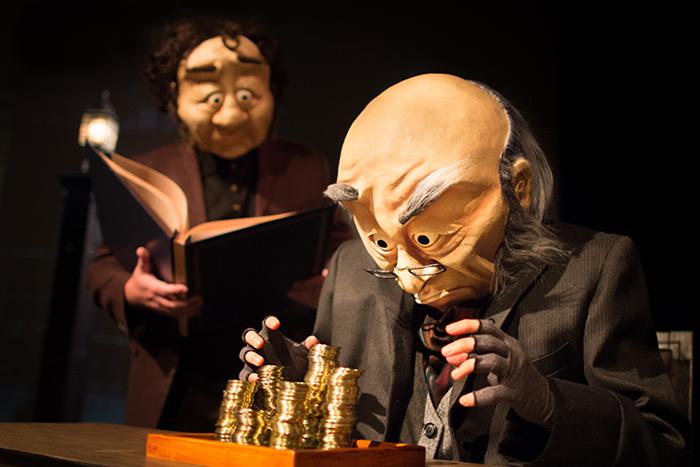 The WONDERHEADS are a physical theatre company specializing in mask performance and visual storytelling. The co-founding ‘heads’ of WONDERHEADS are Kate Braidwood and Andrew Phoenix, who came together in 2009 resolved to conjure a little magic and wonder into the world. Armed with their respective careers in the professional theatre and a shared background in the most curious of MFA degrees (Ensemble Based Physical Theatre, Dell’Arte International) they set out to create their first show, Grim and Fischer, the story of a feisty grandmother who battles it out with the Grim Reaper himself.

This show served as a launchpad for the company and over the past twelve years we have developed five original productions: Grim and Fischer, LOON, The Middle of Everywhere, The Wilds, and A WONDERHEADS Christmas Carol, which have toured to festivals and performing arts centres throughout Canada and the United States. In 2013 the company was named one of ten Scion Motivate finalists, a US national contest recognizing entrepreneurs in the creative arts. The WONDERHEADS also frequently engage in a variety of outreach and teaching activities including workshops, in-depth residencies, lecture demonstrations and master classes. When not on the road, they call beautiful Victoria, BC, home.