New Public Artwork a Symbol of Welcome at Museum of Surrey

The Rivers that Connect Us by kʼwyʼiʼyʼe Spring Salmon Studio is a monumental sculpture that makes an important contribution to the Cloverdale Historic District.

Surrey, BC – A new public artwork has been installed at Museum of Surrey, the final component of the Museum expansion. The artwork is easily viewed by those travelling along Highway 10.

Designed and fabricated locally by kʼwyʼiʼyʼe Spring Salmon Studio (Drew Atkins, Phyllis Atkins, and Aaron Jordan), The Rivers that Connect Us is a monumental sculpture that makes an important contribution to the Cloverdale Historic District by acknowledging and reflecting the longstanding presence of First Nations peoples.

The artwork’s five-metre-tall, illuminated paddles are raised to the sky recalling a traditional Coast Salish gesture indicating peace and respect made when a canoe traveller approached a village. The artwork’s welcoming gesture is intended to honour the diversity of newcomers arriving in Surrey and the traditional lands of the Coast Salish peoples.

The sculpture’s four paddles encircle a 3.5-metre round base that features a design inspired by the traditional form of a Coast Salish spindle whorl, a tool used by Coast Salish women to spin wool for weaving. The base also references a compass and the four directions. The Salish Eye designs around the base of the paddles represent the seven traditional teachings of the Kwantlen peoples: health, happiness, generations, generosity, humility, forgiveness, and understanding. 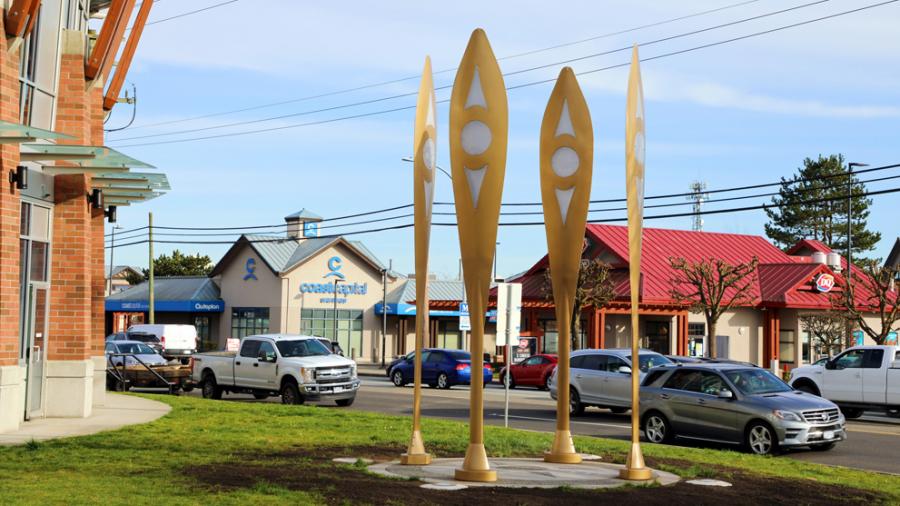 While referencing the deep history of the land and the traditional territory of the Coast Salish peoples including the q̓ʷɑ:n̓ƛ̓ən̓, q̓ic̓əy̓, and səmyəmɑʔɬ (Kwantlen, Katzie, and Semiahmoo First Nations) and traditional Coast Salish design, the sculpture also incorporates innovative technology with its steel and polycarbonate materials and programmable LED lighting.

Community consultation guided this public art opportunity from the outset. Multiple community engagement sessions were held, culminating in a group of Cloverdale residents serving on a panel to select the artists and artwork concept. One of the key recommendations from the community was that the sculpture serve as a gateway feature for travellers to Cloverdale and the City of Surrey. The lighting will ensure the artwork is visible at night and fulfills the expectation of the Cloverdale community.

The artwork also offers an invitation to learn more about Surrey’s history, located beside Museum of Surrey (17710 56A Avenue) and Surrey Archives (located in the 1912 Municipal Hall).

For the artists, The Rivers that Connect Us provided an important opportunity to mark the traditional territories on which Surrey is built. They say, “The Fraser River and its local tributaries—the Salmon, Serpentine, and Nicomekl Rivers—formed a transportation network that connected First Nations people in the area since time immemorial. Relied upon for resource gathering, travel, and trade, these rivers were traversed by canoes from many nations. Presently, the Highway 10 corridor, and its many connecting roads, is today’s river.”

The artwork’s title, The Rivers That Connect Us, is a reminder and an invitation to a shared human connection regardless of cultural or ethnic backgrounds.

Drew Atkins (Nəq̓ɑɬc̓i) is a member of the Kwantlen First Nation community by marriage to his wife and fellow artist, Phyllis Atkins (q̓ʷɑt̓ic̓ɑ’s). He works in many mediums including painting, drawing, carving, and sculpture. He was trained in the Coast Salish carving tradition while apprenticing with his dear friend and mentor Xwa-lack-tun (Rick Harry). Atkins owns and operates K’wy’iye’ Spring Salmon Studio and Gallery in unceded Fort Langley, BC with Phyllis Atkins. springsalmonstudio.com

Phyllis (Qwoy’tic’a) Atkins is an artist of the Kwantlen First Nation whose name means “I wear the clouds like a blanket” or “Shrouded in clouds.” Her name comes from the Nɬeʔkepmx language and it was given to her by her maternal grandfather Hereditary Chief Anthony Joe of the Shakan Band (Thompson River People). Phyllis is also part Sto:lo (People of the river). Phyllis has taken oil painting lessons from Barbara Boldt and hand-carved silver jewelry lessons by Master Carver Derek Wilson. She is a renowned painter and jeweler at their home on Kwantlen First Nation in Fort Langley. springsalmonstudio.com

Aaron Jordan grew up surrounded by artists and craftsmen of all mediums. Working for a few years in art galleries and museums led Aaron to attend Langara College to study fine arts. He went on to discover the world of film and was swept up by the creativity and diversity of the industry while working as a sculptor and carpenter building sets and props. ajordancreation.com 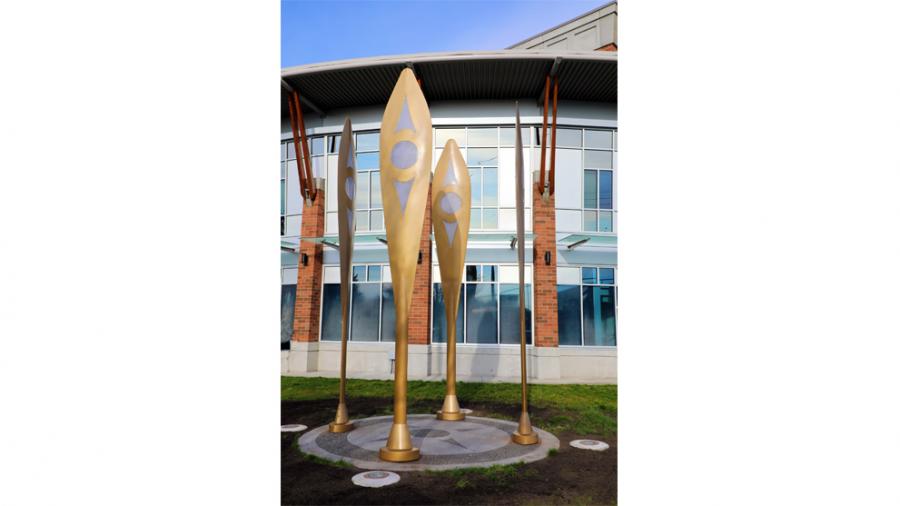 Established in 1998, Surrey’s Public Art Program contributes to the creation of a lively, beautiful, inclusive, and complete community. The City’s art collection reflects community identity, cultural diversity, and Indigenous heritage. Public art contributes to placemaking across the City and its sustainable socio-economic development.

Among the 100+ artworks in Surrey’s public art collection are mosaics, paintings, and interactive sculptures that remember Surrey’s history, enhance infrastructure, and honour the surrounding natural environment. From subtle to iconic, public art can be found in the City’s parks, on pathways, streets, SkyTrain pillars, and civic buildings throughout the City of Surrey. For more information about the Public Art Program and the collection, visit surrey.ca/publicart.