To make cycling safer and to encourage more cycling in Surrey, the City is building a more extensive network of protected cycling routes. This means adding more protected, connected and continuous cycling corridors in key locations across the city, starting with Surrey City Centre.

Protected cycling routes increase the safety of cyclists through physical separation from other road users. Physical separation can be achieved using things like planter boxes and curbs placed at strategic locations along a road to minimize conflicts between cyclists and cars. 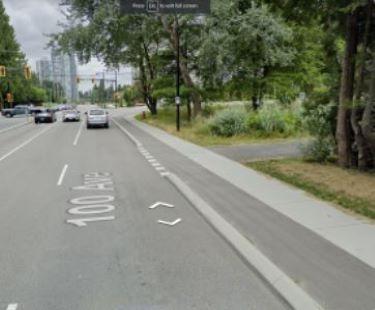 Example of curbs used to protect cyclists from vehicles. 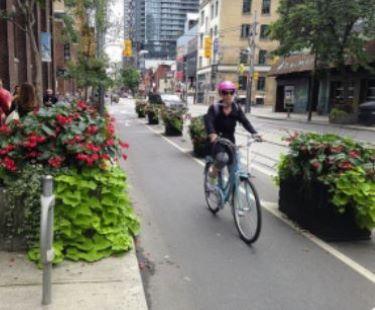 Example of planter boxes used to protect cyclists from vehicles.

Surrey has an extensive network of cycling routes, with 1,133 lane kilometres of bikeways. However, the 2016 Census showed that Surrey has the lowest cycling mode share in Metro Vancouver at 0.4%.

Why is the cycling mode share so low? Because most of the bikeways in Surrey are painted or shoulder bike lanes on higher speed, higher volume roads and do not provide the protection cyclists need to feel safe. ICBC collision data confirms this, as people who cycle in Surrey are three to four times more likely to be hit by a car than cyclists in Vancouver.

As a result, most of Surrey’s cycling network is designed for a small percent of the population that is comfortable cycling on busy streets without protection from cars and trucks.  Recent surveys indicate 60% of residents were interested in cycling more.

To make the cycling network safer, more comfortable and attractive to cyclists, Surrey needs a larger network of cycling routes that is protected, connected and continuous in locations that have the greatest cycling potential – like City Centre.

In the next five years, 11 kilometres of protected cycling routes are planned to be completed as part of various major Capital Projects in City Centre. They will be built through a combination of road widening projects and cycling-specific projects outlined in Surrey’s 10 Year (2021-2030) Servicing Plan.

Where do we start?

Over summer and fall 2021, Surrey will add protected cycling paths on the following corridors:

These 6 kilometres of quick-build projects are funded through TransLink cost-sharing funding to support regional cycling investments. This will build on the 9 kilometres already in place, and supplement additional capital projects to result in City Centre having over 26 kilometres of protected cycling routes. 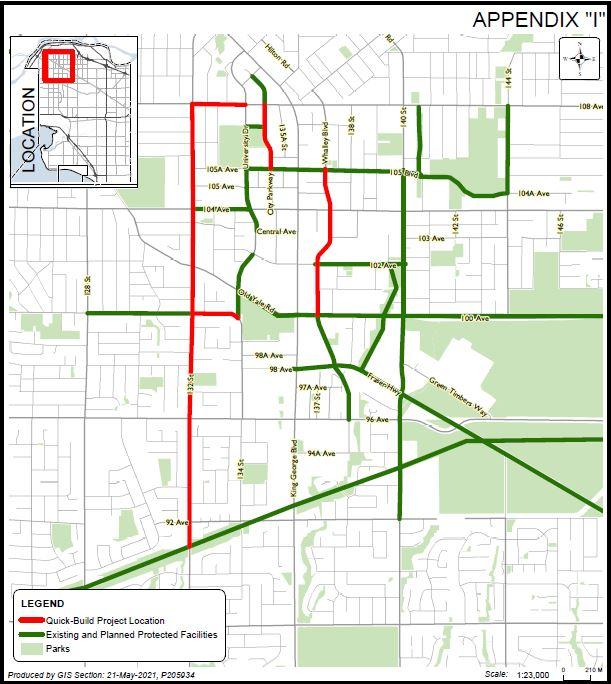 These protected cycling routes will be added to City Centre using the "quick-build" method. As the quick-build measures are intended to be fast and lower cost, working within existing curbs will be done to the greatest degree possible.

The quick-build projects will use a variety of construction methods with a focus on curbs and planters. The projects will be designed to minimize impacts to on-street parking, access to local businesses and transit).

In most cases, quick-build cycling routes are temporary and will be replaced with more permanent construction through upcoming capital projects or through nearby redevelopment.

Surrey will be monitoring the usage of the cycling routes by conducting counts on a regular basis, before and after the implementation of the “quick-build” projects.

This project will communicate directly with affected residents, local businesses, and key stakeholders. Staff will be available to gather feedback from the public and answer frequently asked questions.

For more information on this project, or to provide early feedback, contact transportation@surrey.ca.