Review land use plans for the East Newton community.

East Newton is the geographic name of the neighbourhoods around Chimney Hill, east of 144 Street, north of 64 Avenue and Hyland Creek, and south of Bear Creek. In addition to the creeks, the area is home to several schools, including Chimney Hill Elementary, T.E Scott, and the Regent Christian Academy, as well as the Valley View Cemetery.

The area is separated into three land use plans, each of which was planned through separate Neighbourhood Concept Plan (NCP) processes. The development of these neighbourhood plan areas was guided through the 1993 Local Area Plan for East Newton, which provided an overall guide for land use in the area.

These three East Newton land use plans, now largely built out, provide direction on the type and density of development, urban design, parks and community amenities and engineering infrastructure.

There are three plan areas in East Newton:

The East Newton plan areas designate land uses for the broader Chimney Hill community, generally located south of Bear Creek and east of 144 Street. The plan areas are also bordered by the Chimney Hill residential estate in the north east and Hyland Creek in the South. 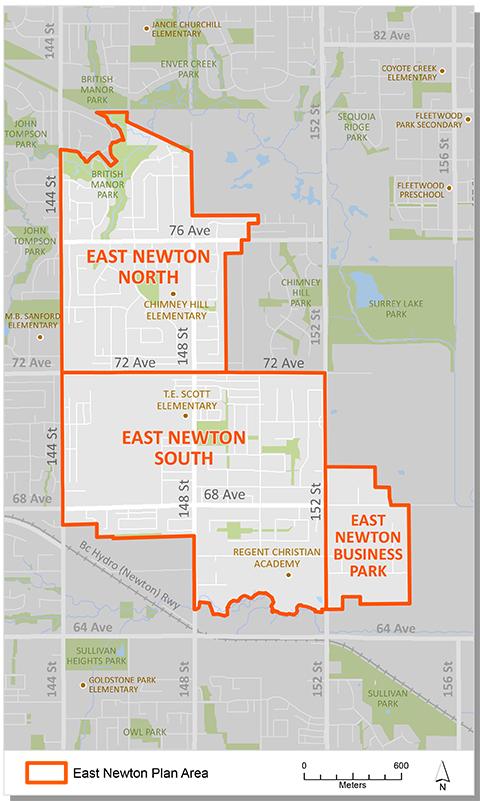 In 1992, City Council identified East Newton as one of several areas of the City that would be suitable for development consideration. A Local Area Plan was subsequently approved in 1993 to serve as an overall guide for land use, servicing and development in the area. The Plan also identified the Neighbourhood Concept Planning (NCP) approach to further plan the north and south portions of the plan area.

In March 1999, Council approved the East Newton Business Park NCP, completing land use planning for the broader East Newton community. This NCP, unlike East Newton North and South, was designated predominantly as business park to provide important employment lands for the area. The NCP also included a live-work designation, south of 66 Avenue, which was intended for supplementary employment uses, and, if live-work was not feasible, would become business park.

In March 2020, Council approved amendments to the East Newton Business Park NCP, including the replacement of the live-work designation and associated park and buffer designations with the business park designation. Since the NCP’s approval in 1999, whereas most of the business park designated land has been developed or is under application, the live-work designated land has not been developed nor demonstrated market feasibility. The amendments also maximize employment opportunities and bring the NCP into compliance with citywide and regional employment policies.