Masks are optional in City facilities. Learn about Surrey's response to COVID-19

Re-imagine the year 2011 and explore time and space in our accelerated culture. 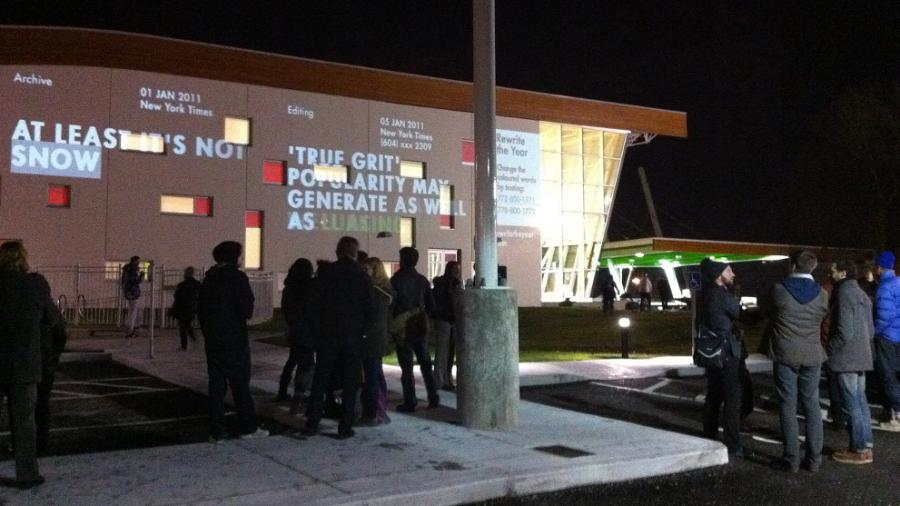 According to the late media theorist Marshall McLuhan, speed impacts everything from how we experience physical space to how our senses operate in an age of communication technology. Speed makes distances smaller. McLuhan famously referred to this phenomenon as the "global village." While there are benefits to this global village, our contemporary moment also critiques speed and technology, asking what is too fast and where we might find modes in which to be slow.

Artists in Electric Speed were invited to create work that questions the existence of a global culture and examines how accelerated culture affects our experience of time and space. The artworks can be viewed on UrbanScreen and previewed at Electric Speed.

Curators Kate Armstrong and Malcolm Levy say, “We find the artists in conversation with popular culture but also with the material world. The effects of technology are made a part of this dialogue. Though speed is neither celebrated nor rejected, we find in these works reminders of the slow."

This project is presented in conjunction with the McLuhan in Europe 2011 initiative celebrating the centennial of Canadian media theorist Marshall McLuhan. Featuring new works from Canadian media artists, Electric Speed makes its world premiere at UrbanScreen and is the only Canadian presentation of this international project.

Featured Rewrite the Year by Melissa Mongiat and Mouna Andraos
December 2, 2011 to January 15, 2012

Rewrite the Year by Melissa Mongiat and Mouna Andraos revisits 365 key headlines from 2011. From protests, elections, conflicts, change, victories and other events—local and international—the year is re-broadcast one headline at a time. Citizens are invited to not only view a headline but also to change one of its keywords using text messages sent from their phones. As the artwork moves through the 2011 headlines and gets closer to the current date, yesterday’s news becomes today’s headlines. Citizens have the opportunity to rewrite history, deciding how it should be told, and how it can be transformed into a hopeful message for the future.

Jeremy Bailey produces a multi-level advertising campaign for himself as a "famous new media artist," using the large scale surface of Urban Screen in conjunction with google ads and paid promotion on YouTube as a way to critique the role of the artist in a radically commercial, global sphere.

Jillian McDonald is locked in a staring contest with famous vampires from films such as Twilight, inserting herself into a dialogue with popular culture and raising questions about the position of the consuming subject and the speed of desire.

Jon Sasaki considers speed in the context of a daredevil culture, raising the spectre of radical collapse by filming a motorcyclist in slow motion on the vertical track of a "Wall of Death" motordrome.

Will Gill uses a bow and arrow to shoot glowsticks across placid Newfoundland landscapes, producing mysterious bolts of light that are associative of an information-permeated world.