Learn about Surrey's response to COVID-19

Masks are optional when in City facilities. Learn more about the City’s response to COVID-19. 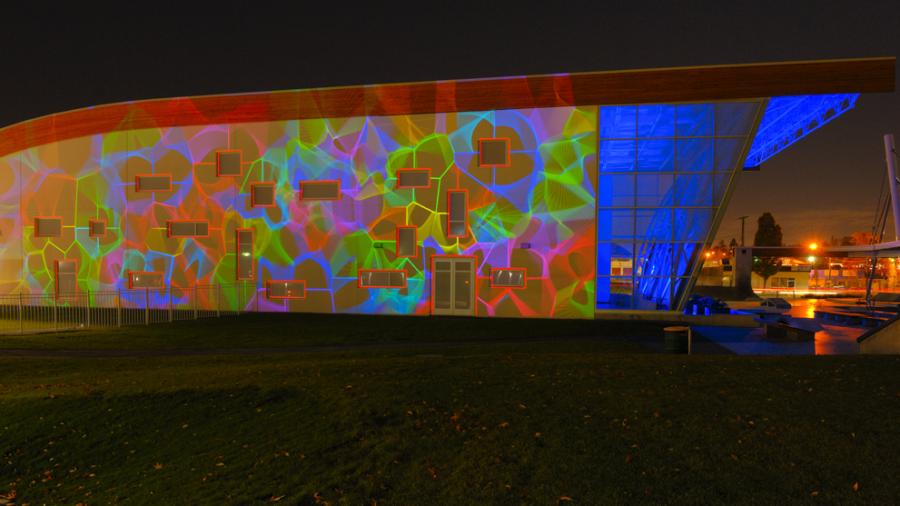 Fiction Façade is a digital animation activated by movement in front of UrbanScreen. The artwork animates sequences that recall arcade games like pinball. Abstract geometric shapes and patterns bounce off the window perimeters, explore the architectural surface of the Chuck Bailey Recreation Centre, and appear to get stuck where there is no space available to let them out.

“It is reminiscent of early video games, with a kind of retro-futurism,” say artists Konstantinos Mavromichalis and Nathan Whitford. “It is meant to address the site using the physical attributes of the facade itself, drawing attention to the interaction of digital media and architectural form.”

Fiction Façade also comes with a soundscape informed by older console-based 8-bit video games. Sounds are generated by collisions between the projected virtual objects seen in the animation and the physical objects such as the windows and borders of the building. Visitors can tune into 89.9 FM on an MP3 player or car stereo when in front of the artwork to hear it.

Urban Visuals (Konstantinos Mavromichalis and Nathan Whitford) specializes in creating immersive environments from permanent public artworks to event-based installations, projected stage design, and exhibition design. Their principle medium is light, and their most visible achievement was the development of the animated lighting sequences for the Olympic Rings used as a media backdrop during the 2010 Olympics. Recent projects consist of public artwork commissions, sound responsive walls or ceilings in hospitality venues, and digitally driven retail exhibits such as the Aritzia flagship store on 5th Avenue in New York. They are based in Toronto, Canada and London, England.