Learn about the significance of Old Yale Road, which was constructed in 1861 as a trail, and then upgraded to a wagon road in 1865. 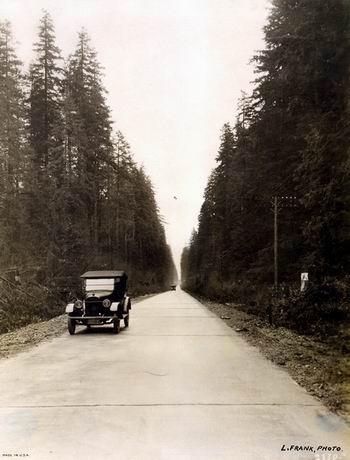 Description: The construction of a trail south of the Fraser River from New Westminster to Yale (the terminus of steamboat travel on the Fraser River) began in 1861. This trail was upgraded into a "wagon road" in 1865. In 1923, Pacific Highway became the name used for the route from Vancouver to Fries Corner and then south through Cloverdale to the US Border.

Eventually, Pacific Highway became the name associated with 176 Street, and Fraser Highway was used after the former Old Yale Road route into the Fraser Valley was upgraded in the 1930's. Three original segments are included: the one through the heavily treed area of Green Timbers because it is reminiscent of the original heritage character of this historic transportation route, a portion in Whalley where the historic intersection exists with Semiahmoo Trail and a portion near 186 Street that exemplifies the twisting and turning alignment used by the original road builders.