Monthly strata fees are based on the following:

Surrey City Energy rates are competitive with the cost of both electricity and a hybrid gas-electricity system without the hassle of owning and operating complicated mechanical equipment within the building. Customers of Surrey City Energy will never have to replace failing boiler systems. Below are the current estimated costs for SCE customers for a 750 ft2 unit and how this compares with other thermal energy providers. While the cost of natural gas is currently very low, it will increase significantly over time with the scheduled carbon tax increases and natural gas based heating systems will not meet the City’s net-zero GHG target. 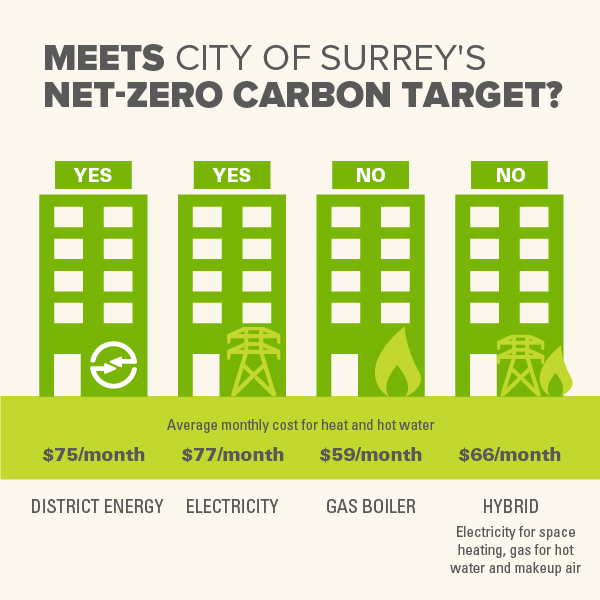 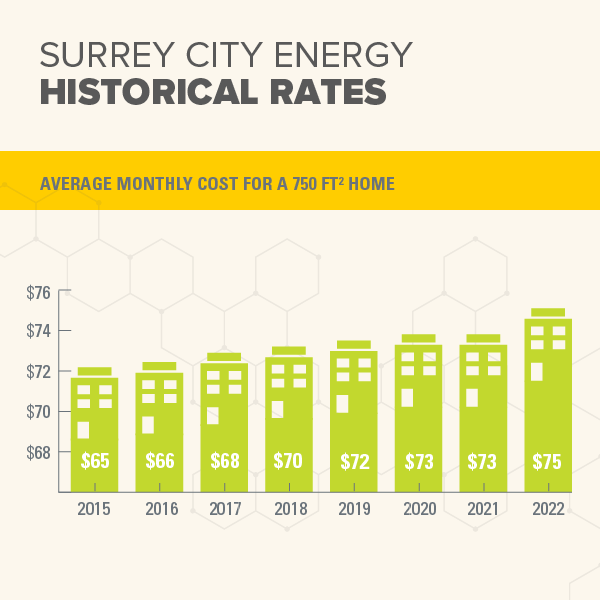 As an example, the 2021 hot water and space heating costs for a 750 ft2 apartment remain the same as 2020 costs and is approximately $73.41/month.  A 3% annual increase results in $2.20 increase per month from $73.41 to $75.61. These rates are roughly the same as annual inflationary increases on daily living costs such as groceries, gym memberships, utility costs and over time are generally far more stable than other energy sources.

How do SCE rates compare to other thermal energy providers?

District energy costs are competitive with other thermal providers including other district energy systems in the Lower Mainland, FortisBC, and BC Hydro. 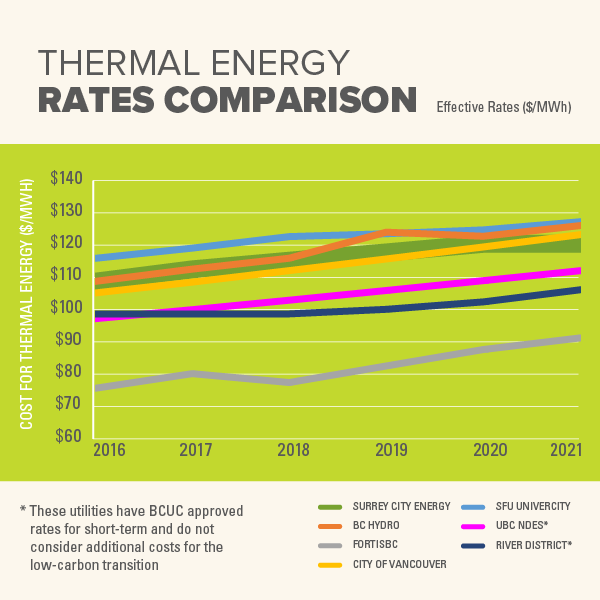 The ability to use a variety of local low-carbon energy sources in the district energy system keeps its price stable. This means that your bill will not be affected by energy market fluctuations typically experienced by electricity and gas. Historically, BC Hydro’s annual rates have fluctuated from -1% to 7%.

Although natural gas prices have been historically low, they are not guaranteed to stay low for much longer based on the federal government’s recent announcement to raise the carbon tax to $170/tonne by 2030 from current levels at $45/tonne which will result in gas prices almost doubling by 2030. Furthermore, natural gas based heating systems are not compatible with the City’s net-zero GHG target.  A district energy system fuelled by low-carbon and renewable energy sources is a key strategy for the City of Surrey to lower GHG emissions and to be carbon neutral by 2050.

Surrey City Energy's rate structure compares favourably to other district energy systems and energy providers of both electricity and gas boiler systems. Rates are approved annually by Surrey City Council, with advice from an independent External Rate Review Panel. The City regulates Surrey City Energy in the absence of the BC Utilities Commission review that oversees private systems.