Review the land use plan for the East Clayton neighbourhood of Cloverdale.

East Clayton is the name of the first urban neighbourhood developed in Clayton Heights. It is located north of Fraser Highway along the border with the Township of Langley. Originally characterized by its rural acreage lots and agricultural uses, the area is now home to over 15,000 Surrey residents. Developed over gently sloping highlands, the area provides excellent views of the mountains and lowlands and is home to many significant and protected watercourses.

Planning for East Clayton was guided through the 1999 Clayton General Land Use Plan, which provided an overall guide for land use in the area. East Clayton was envisioned as the first community to be developed out of that plan.

The East Clayton area is separated into four plan areas, each of which was developed through separate Neighbourhood Concept Plan (NCP) processes. These include the main East Clayton NCP, two subsequent extensions to the west and north, and a transit-oriented development area along Fraser Highway. The Transit Oriented Area (TOA) plan guides future amendments to the main East Clayton NCP. Specifically, development that will integrate with future rapid transit on Fraser Highway to create a compact, sustainable mixed-use center for East Clayton.

These land use plans provide direction on the type and density of development, urban design, parks and community amenities and engineering infrastructure.

The East Clayton plan areas designate land uses for the south eastern portion of the broader Clayton Heights community. Combined, the plans encompass an area of approximately 314 hectares (776 acres), generally located North of Fraser Highway and west of the Township of Langley. The area is bordered by the West Clayton NCP to the west, and a future North Clayton NCP to the north. 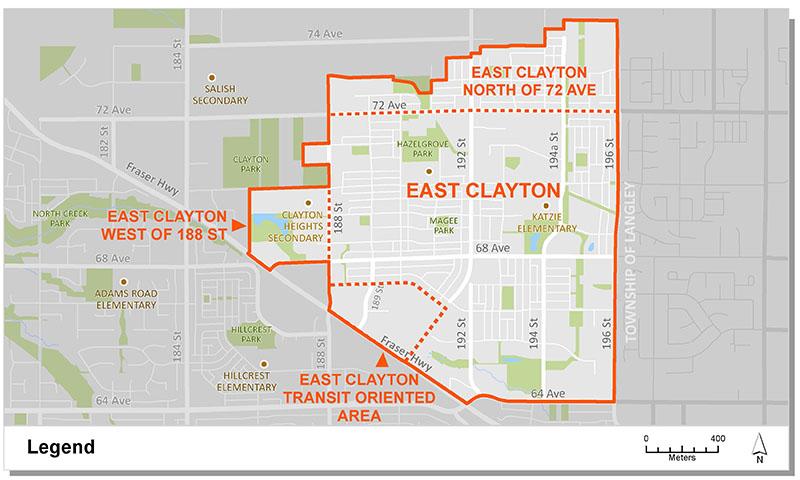 In 1996 City Council identified Clayton Heights as one of several areas of the City that would be suitable for new development. A General Land Use Plan was approved in 1999 to serve as an overall guide for land use, servicing and development in the area. The Plan presented a vision for sustainable growth, efficient development  and a compact livable community. It also identified the Neighbourhood Concept Planning (NCP) approach to plan future Clayton Neighborhoods.