South Newton is the name of a large neighbourhood within the southeast of the broader Newton community. The neighbourhood features a variety of housing types, and is home to several neighbourhood commercial nodes, including Panorama Heights at 152 Street and Hwy 10 and Sullivan Heights at 64 Ave and 144 Street.

South Newton is also home to several important fish bearing creeks, including the headwaters of Archibald Creek, Sullivan Heights Creek and several tributaries of Hyland Creek. The planning process for this neighbourhood area was initiated in 1996, and consisted of a series of background studies, a community consultation process and an engineering and servicing strategy. In 2004, Council approved an amendment to the Plan which including land use changes for small lot single family designations.

This plan is now being implemented. It provides direction on the type and density of development, urban design, parks and community amenities and engineering infrastructure for the neighbourhood.

The South Newton plan area designates land uses for a large portion of the broader Newton community. The plan encompass an area of approximately 485 hectares (1200 acres), generally located north of Hwy 10, east of King George Boulevard  and west of 152 Street. The area is bordered by the East Newton NCPs to the northwest. 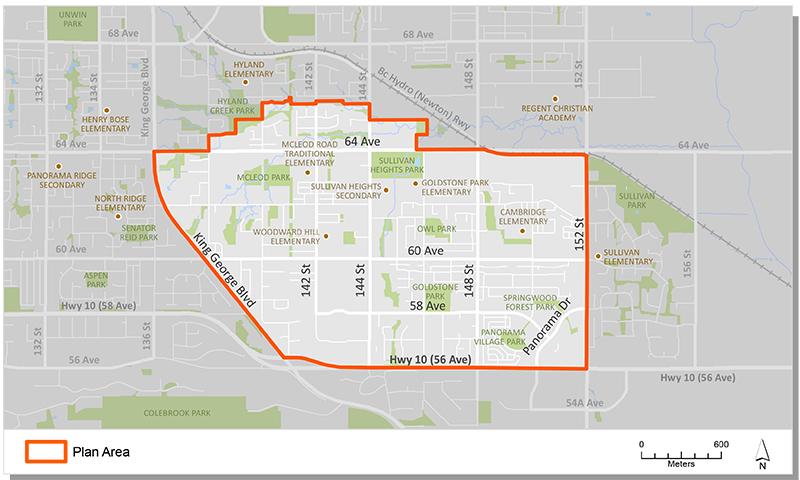 In March, 1997, Council gave approval in principle to the proposed Land Use Concept Plan for South Newton and authorized staff to commence the Stage 2 planning process. Council also authorized staff to prepare a comprehensive engineering strategy and financial plan to implement the plan. In May 1999, Council endorsed Corporate Report C426 and Corporate Report C427 which approved the South Newton NCP and engineering strategy respectively.