Review the plan to transform Newton Town Centre into a vibrant and active urban centre.

A new plan for Newton Town Centre was adopted by Council on July 13, 2020. It was developed through extensive community consultation, with support from residents, stakeholders, agencies,  and City staff.

The intent of the plan is to guide the development of a vibrant, compact, and transit-oriented town centre over the next 30 years. The original Newton Town Centre Plan was approved in 1990 to coordinate growth and reinforce the area’s unique role as a community and civic hub. The 2020 plan is a contemporary update. It reflects the original intent of fostering a community and civic hub, while presenting updated land uses, infrastructure, and amenities to support another 30 years of growth.

The Newton Town Centre plan area encompasses approximately 61 hectares (151 acres) on the west side of Surrey, bounded by 72 Avenue to the north, 138 Street to the east, 68 Avenue to the south, and 135 Street/70B Avenue/134 Street to the west.  The plan area also forms the southern half of the Urban Centre boundary for the Newton Municipal Town Centre identified in the Metro Vancouver Regional Growth Strategy. 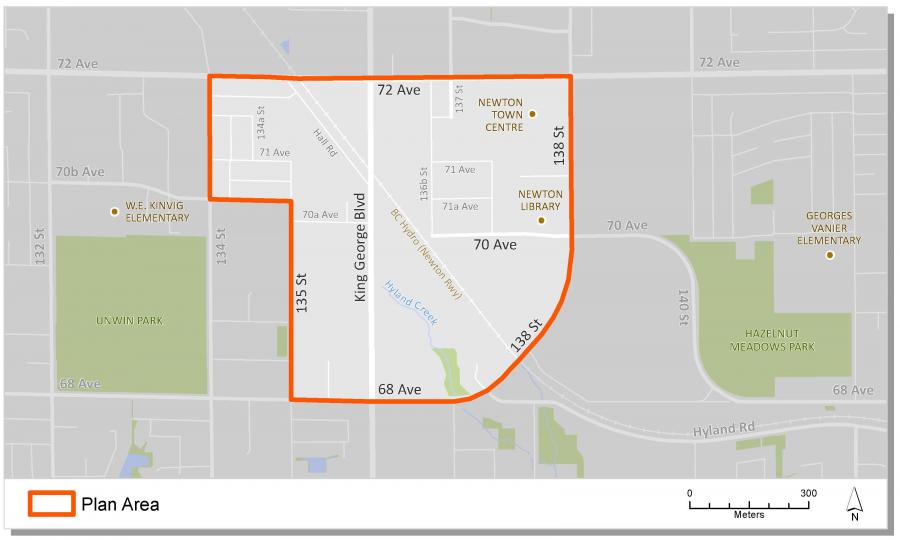 The Newton Town Centre Plan was first developed and adopted by Council in 1990. The Plan, bounded by 76 Avenue, 68 Avenue, King George Highway, and 138 Street, proposed a range of retail and commercial uses, with some high-density residential and a core of civic and recreational uses.

Since the initial Plan's endorsement, a number of civic and recreational facilities have been built, as well as some commercial growth in the area north of 72 Avenue. Key sections of the Plan area, however, were never developed, particularly in the area south of 72 Avenue.

In 2010, following a comprehensive community consultation process, Council endorsed Corporate Report No. R093, which approved the Stage 1 land use plan and authorized staff to continue working with TransLink to undertake the Stage 2 component of the Plan.

Based on this vision, Surrey and TransLink confirmed plans for rapid transit along the corridor, which included a further review of the Newton Town Centre Plan.

In 2014, Council endorsed Corporate Report No. R035, which provided an update on the planning process and authorized staff to further review and update the plan.

Between 2014 and 2018, community engagement took place through Public Open Houses, stakeholder meetings, community presentations, and surveys to develop the Stage 2 plan.  In November 2018, Council suspended the Surrey-Newton-Guildford LRT project.  As a result, a review of the draft Stage 2 plan and additional community consulation took place in 2019.