Get involved and help update the Semiahmoo Town Centre Plan.

In March 2020, Council endorsed Corporate Report R049, which approved the Stage 1 Plan, including the Land Use, Transportation and Parks & Amenities concepts. Council also directed staff to continue working on the Stage 2 (final) Plan.

We've been working on the Semiahmoo Town Centre Plan since 2018 and it is almost done! We are in the final steps of preparing the Stage 2 Plan for Council consideration this Fall. Take the survey to help perfect the plan before it goes to Council.

Where We Are At:

Thank you to everyone who has been involved in the planning process to-date. Since we started in 2018, the plan has been updated through a comprehensive community engagement process. In total, over 3,300 residents and stakeholders have participated by attending workshops, open houses, stakeholder meetings or by completing an online survey. To date, we have:

Review the Stage 1 Community Engagement Summary. There is still lots of work to do and your input is important. Check back shortly for additional engagement opportunities as we continue refining the Plan.

The plan area extends from 16 Avenue (North Bluff Road) in the south to 24 Avenue in the north, and from around Martin Drive in the west to Earl Marriott Secondary School in the east. The total study area includes 136 hectares (336 acres). 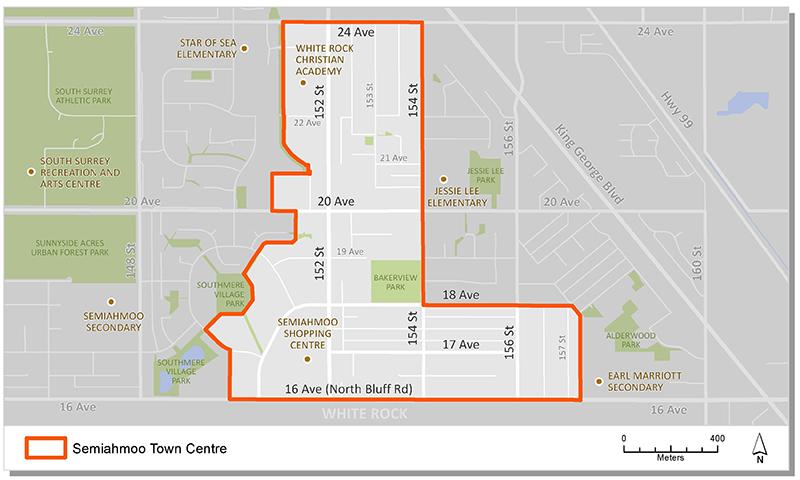 In November of 2005, staff took their early research findings to the public. An initial open house shared residential and commercial growth projections. Stakeholders were asked to comment on housing and transportation options to meet future needs.

Staff presented land use and design options at the second open house in 2006. A concentrated densification approach was suggested to promote continued vibrancy in the area.

On September 25, 2006 Council approved a Stage 1 Land Use Concept and authorized staff to proceed with the Stage 2 component of the Plan. The Stage 1 Plan provides a general basis for more detailed planning in Stage 2 (Corporate Report No. C018).

In May 2012, Council approved an Interim Land Use Plan to guide development in the area. Council directed staff to expand the plan boundary. Extensions include a future rapid transit corridor along 152 Street and a potential medical district along 16 Avenue.

In July, 2018, workshops identified extension area residents’ values and developed ideas for land use to support future growth. Key issues were captured in a live graphic recording. A preliminary land use concept for each proposed extension area was then developed by staff. Workshop participants were then surveyed based on these preliminary land use concepts.

A public open house was held on February 28, 2019 to inform all stakeholders about the updated planning process. View the open house display boards. A concurrent survey gathered citizen priorities and preferences that were used to develop a draft land use concept.

A second public open house was held on July 11, 2019 to provide an overview of the draft land use concept, and to seek input from residents and stakeholders. Staff provided an overview of the principles derived from engagement and how they guided the development of the resultant draft land use plan. A third survey was also offered.  Input from residents was sought on how to further refine the draft. Further changes were made and presented back to the community at a third open house in October. View the display boards for a quick overview of the information presented at the Open House.

A third open house was held from 10:30am to 8:30pm on October 20, 2019 and was attended by over 420 residents and stakeholders. At this event staff provided an overview of the updated plan and sought input from residents prior to it advancing for Stage 1 Council consideration. We've also received over 950 responses to the most recent survey, which was available online from October 16 to November 12, 2019. View the display boards and a Plan Summary for a quick overview of the information presented at the Open House.

Input received from the public was used to guide the development of the updated Stage 1 Plan.

Step 4: Refining the Plan < We are here

The preparation of an engineering servicing strategy is a significant component of the Stage 2 planning process. While the Plan Area is serviced by relatively complete storm, sanitary and water infrastructure networks it is anticipated that infrastructure upgrades will be required to accommodate the land uses proposed within the Stage 1 Plan. A detailed engineering analysis will identify utility infrastructure improvements to support future development. Infrastructure costs and financing requirements will also be identified.

In addition to an engineering servicing strategy, there are a variety of detailed planning processes necessary to develop the final and comprehensive Stage 2 Plan, including:

We received almost 900 completed surveys on the November 2020 Urban Design Survey. Staff have reviewed and analyzed the survey responses. Review a summary of the results.

Once the Plan is ready staff will report back to Council seeking endorsement of the final (Stage 2) Semiahmoo Town Centre Plan. This step includes:

The first land use plan for Semiahmoo Town Centre was developed in 1993. It established the intent to focus urban development in the Town Centre, centered on the Semiahmoo Mall.

In July 2004, Council endorsed Corporate Report R170 which directed staff to update the Plan and reinforce the role of Semiahmoo Town Centre as the commercial and community hub for South Surrey.

In May 2012, following a multi-year community engagement process, Council endorsed Corporate Report R118 which approved an Interim Land Use Plan. Council also directed staff to continue the planning process, expand the plan area boundary, and consider future rapid transit along 152 Street as well as a potential medical district on 16 Avenue.

In May 2018 staff began the process of further updating the 2012 Interim Plan to address Council direction and priority. The intent of the current planning process is to update the existing Stage 1 Plan for Council consideration, before proceeding forward with the Stage 2 planning process.