Keep up to date with the Darts Hill Neighbourhood Concept Plan planning process.

We are undertaking a long term plan for the Darts Hill neighbourhood in South Surrey. The intent of the plan is to guide the re-development of this area over the next 30+ years.

This plan will help us achieve a healthy and sustainable neighbourhood with a diversity of housing types, inter-connected transportation choices, local amenities, natural areas, parks, and gathering places.

Thank you for participating in the December 2020 Survey. We received almost 400 completed surveys. Review a summary of the survey results.

We are now reviewing public and stakeholder comments as staff prepares a final Stage 2 Plan report and Plan Document for Council consideration. The final Stage 2 Darts Hill Plan is expected to be completed and brought forward to Council for approval in spring 2021.

Consultation regarding the Darts Hill plan is now closed. Thank you to everyone who has been involved in the planning process to-date. Over the past 4 years the plan has been completed through a comprehensive community engagement process. In total, nearly 1,500 residents and stakeholders have participated by attending workshops, open houses and stakeholder meetings, or by completing online surveys. Since 2016, we've:

For questions or comments, please contact us at GH3Plan@surrey.ca. 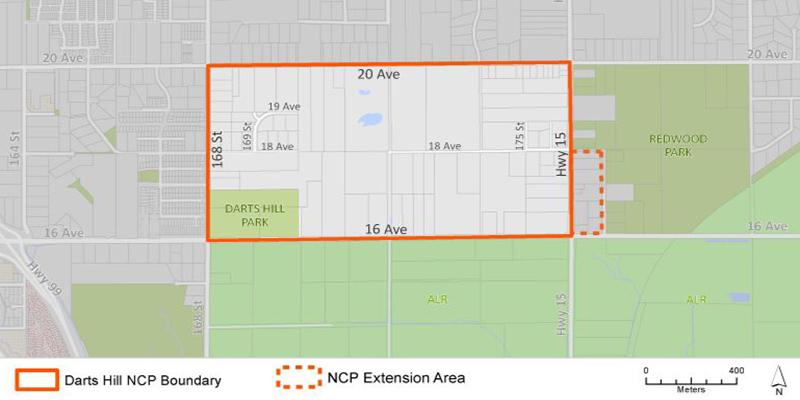 October 22, 2015 - Open house is hosted by a major landowner in the Grandview Heights #3 area in order to gauge the level of interest among landowners for an NCP process to begin.

January 6, 2016 - City receives a petition from land owners in Grandview Heights #3 area seeking the preparation of an plan process for the area.

November 23, 2016 - A Public Open House meeting is held to begin the process of preparing a Neighbourhood Concept Plan (NCP) for the Grandview Heights NCP area #3.

March 28, 2017 - A Citizen’s Advisory Committee (CAC) is established made of up local residents and landowners as part of the overall consultation process for Grandview Heights Area #3.

September 12, 2017 - A Property Owners Meeting was held with land owners in the Hazelmere Estates area of the Grandview Heights #3 area to discuss long term land use concept ideas.

November 27, 2017 - A Public Open House was held to identify plan features, gather feedback on land use options and planning priorities. Attendees were invited to review and comment on display boards showing planning principles, and three land use concept options.

Summer 2019 – On July 22, 2019, Council considered Corporate Report R163 and approved the Stage 1 Plan for Darts Hill. Council also authorized staff to initiate Stage 2 of the planning process and expanded the plan boundary for a small pocket of lands to the east of 176 Street.

Step 5: Completing the Plan < We Are Here!

Once the Stage 2 Plan is ready, following additional community consultation, staff will report back to Council seeking endorsement of the final (Stage 2) plan.

In 2003 Council identified Grandview Heights as an area of the City that would be suitable for new development. A General Land Use Plan (GLUP) was approved in 2005 to serve as an overall guide for land use, servicing and development in the area. It also identified the Neighbourhood Concept Planning (NCP) approach to plan future Grandview neighborhoods.

In July 2016 Council endorsed Corporate Report 186, which authorized staff to begin the process of preparing a Stage 1 Neighbourhood Concept Plan (NCP) for the Grandview Heights Neighbourhood #3 (Darts Hill) area. Since then, a number of background studies have been completed: