Rosemary Heights is the name of the neighbourhoods south of the Nicomekl River, east of Highway 99 and north of Titman Creek. The area is home to a river, important fish bearing creeks and rare wetland habitat. The area is served by Rosemary Heights and Morgan Elementary Schools.

Rosemary Heights has three plan areas which are now largely built out. Each area was planned through separate Neighbourhood Concept Plan (NCP) processes. The 1994 Rosemary Heights Local Area Plan provided a guide for these land use processes.

Together, they provide direction on:

There are three areas in Rosemary Heights:

This Rosemary Heights plan areas designate land uses for the broader Rosemary Heights community, generally located south of the Nicomekl River and east of Highway 99. The plan areas are bordered by the Morgan Heights golf course in the east and the north Grandview Heights NCP in the south. 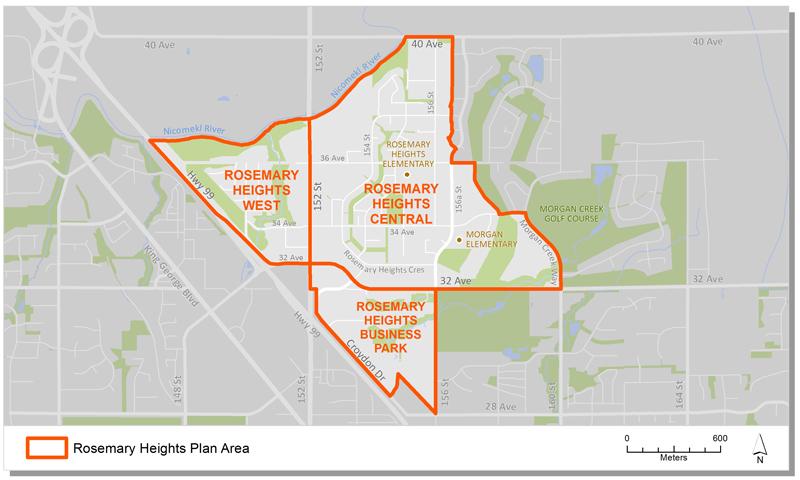 In 1992 City Council identified Rosemary Heights as one of several areas that would be suitable for development consideration. A Local Area Plan was approved in 1994 to serve as a guide for land use, servicing and development in the area. The Plan also identified the Neighbourhood Concept Planning (NCP) approach to further plan the north and south portions of the plan area.

On June 12, 2017, Council approved Corporate Report R130. This was response to community concerns around several development applications in the Rosemary Heights Central NCP. This authorized staff to undertake a land use review of the areas designated as “Suburban.” Staff also evaluated traffic impacts and road network implications associated with all currently proposed land use amendments in the RHC NCP.

On March 7, 2018, Council endorsed Corporate Report R048. This authorized an amendment to portions of the suburban pocket within the Rosemary Heights Central NCP.