Campbell Heights is large employment land area in south-east Surrey, along the border with Langley. Campbell Heights provides employment opportunities for a growing workforce through the designation of business park and industrial uses.

The area is separated into two Local Area Plans (LAPs) that provide direction on the type and density of development, transportation and utility infrastructure, parks and the environment.

This Campbell Heights plan areas designate land uses for the broader Campbell Heights industrial and business park area, generally located east of 184 Street, south of 44 Avenue and west of 196 Street, along the border with the Township of Langley. 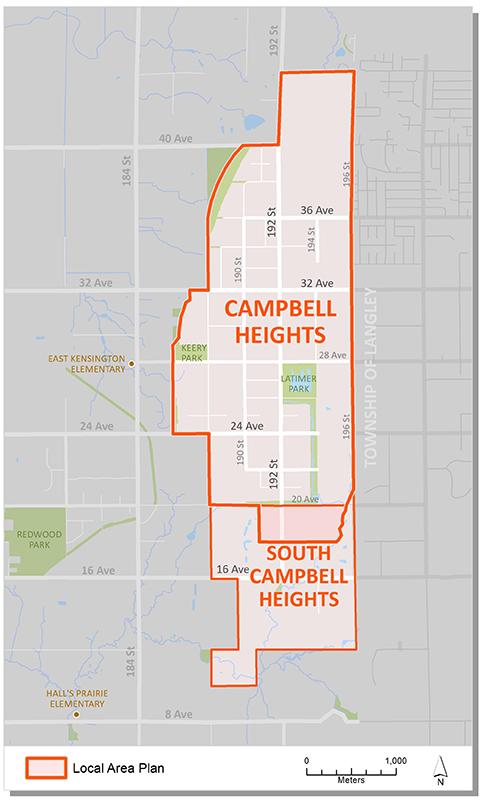 The Local Area Plan process was initiated on September 8, 2014 and began with the commissioning of two background studies:

The Terms of Reference for these studies was approved on December 1, 2014 by Council through Corporate Report No. R19.  These background studies provided key information that advised the land use planning process.​ See the South Campbell Heights Environmental Study Results.

The development of the draft plan was supported by a community consultation process, including a stakeholder committee comprised of local landowners and representatives of environmental and community groups with interests in the area. Consultation opportunities included:

At the second open house information outlining the planning process, findings of the background studies, draft Planning Principles, and the proposed Land Use Concept were presented and discussed. Input was used to make final refinement to the Stage 1 land use concept which approved by Council with Corporate Report R171 in July, 2017.

Following Stage 1 approval of the plan, Council endorsed Corporate Report R201 which granted third reading to the necessary OCP amendments and bylaw readings that were consistent with the Stage 1 land use concept.

From there, staff prepared and submitted an application to amend the Metro Vancouver Regional Growth Strategy (RGS), including potential adjustments to the Urban Containment Boundary (UCB). Metro Vancouver Board approval is required before the required OCP amendment can be considered by Council for Final Adoption.

In May 2018, the Metro Vancouver Board referred the South Campbell Heights RGS amendment application back to the City of Surrey to consider alternates.

It is anticipated that the revised Stage 1 (draft) Plan will go to Council in July 2021 for consideration. If the revisions are endorsed, a formal public hearing will be held on the corresponding amendments to the Official Community Plan (OCP) and if approved a corresponding Regional Growth Strategy (RGS) application will be sent to Metro Vancouver Board.

Once the necessary Metro Vancouver RGS and the City OCP amendments are completed staff will seek Council’s authorization to proceed with Stage 2 of the Local Area Plan process. Stage 2 will include a detailed servicing and transportation strategy to support the approved land uses, detailed design and development policies and guidelines, Aquifer Protection Measures, and a financial strategy.

The Campbell Heights area was originally considered within the South-East Surrey Local Area Plan which was prepared in 1980. The Plan envisaged business park and industrial development in this area to provide employment opportunities for the growing workforce.

In 1999 Council endorsed Corporate Report R2108 which approved a review process for Campbell Heights, with the intent of developing a more refined and relevant employment lands plan for the area.

In, 2003 Council endorsed Corporate Report L008 which provided an overview of the work, to date, on proposed amendments to the Campbell Heights LAP to include an allowance for a portion of the land in the Campbell Heights area to be used for "high-end" light impact industrial uses.

Later in 2003 Council also endorsed Corporate Report L013 which outlined the steps required to implement the first phase of industrial development in Campbell Heights, including the pre-zoning of some lands, preparation of design guidelines and the development of a design review and approval process.

In January 2004 Council endorsed Corporate Report L001 which approved design guidelines and a review Process as the basis for evaluating site-specific development proposals within the Campbell Heights Business Park.

The “Special Study Area” designation is outlined in both the Metro Vancouver Regional Growth Strategy and Surrey's Official Community Plan indicating it as an area of the City where future land planning is projected, potentially leading to changes from current land use in the future. All of the lands within the area are currently outside of the Greater Vancouver Sewerage & Drainage District's Fraser Sewerage Area and the Regional Growth Boundary.

In November, 2017 Council endorsed Corporate Report R201 which gave third reading to "Surrey Official Community Plan Bylaw, 2013, No. 18020, Amendment Bylaw, 2017, No. 19362", as documented in Corporate Report. The bylaw amendments proposed are related to the approval of the Stage 1 South Campbell Heights Land Use Plan adopted by City Council on July 24, 2017.

In May 2018, the Metro Vancouver Board referred the South Campbell Heights RGS amendment application back to the City of Surrey to consider alternates.

Since the referral back from Metro Vancouver Board, the City has worked with Metro Vancouver staff and employment land stakeholders to create a draft revised Stage 1 plan to better respond to regional concerns. It was approved by Surrey City Council in July 2021.