Review the land use plan for the Redwood Heights neighbourhood of South Surrey.

The Redwood Heights Neighbourhood Concept Plan (NCP) was approved by Council on May 4, 2020.  It presents a vision of a compact, environmentally friendly, and sustainable community.

Redwood Heights is the fourth master planned neighbourhood within the broader Grandview Heights community. The Plan was developed through a community planning process supported by a series of background studies, comprehensive community engagement and a detailed engineering servicing review. The final plan provides clear direction on the type and density of development, urban design, parks and environmental conservation, and engineering infrastructure for the neighbourhood.

Development applications may now be considered in the area, consistent with the approved plan.

Redwood Heights is located at the easterly end of the Grandview Heights community. It is bounded by the Agricultural Land Reserve (ALR) to the north and east, 20 Avenue and the existing Redwood Estates to the south and 176 Street (Highway 15) to the west.  It has an area of approximately 201 hectares (497 acres) and currently includes 92 properties. 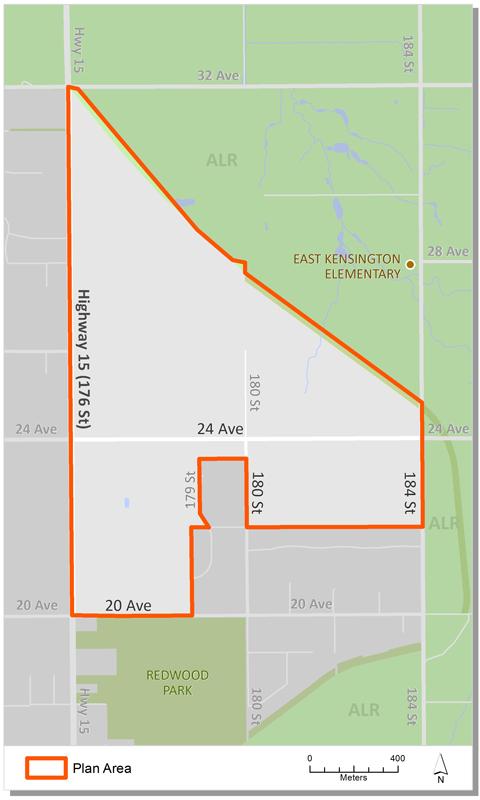 In 2003 Council identified Grandview Heights as an area of the City that would be suitable for new development. A General Land Use Plan (GLUP) was approved in 2005 to serve as an overall guide for land use, servicing and development in the area. It also identified the Neighbourhood Concept Planning (NCP) approach to plan future Grandview neighborhoods.

In December 2010, Council endorsed Corporate Report R263 which updated the planning process and authorized staff to hold additional public consultation on draft land use options. A draft land use plan was developed, supported by studies on the costing of engineering services and a biodiversity levy for the protection of sensitive ecosystems. The costing information was reviewed as part of an early green space levy implementation report.

In October 2013, Council endorsed Corporate Report R201 which approved the Stage 1 Land Use Concept and authorized staff to proceed with the preparation of the Stage 2 component of the NCP.

In March 2015, Council endorsed Corporate Report  R045 which authorized staff to amend the Stage 2 plan process, particularly now it was funded. Moving forward the City would fund costs to develop the Stage 2 components and recover the costs through a future charge on development applications in the NCP.

In April 2016, Council endorsed Corporate Report R073 which provided an update on the development of the Stage 2 process and an overview of the engineering servicing strategy. This included additional traffic modeling study required for Grandview Heights, and overview of stage 2 consultation strategies.

In December 2019, Council considered Rezoning and Development Variance permit File 7919-0300-00 to allow rezoning and subdivision for a future school and park in Redwood Heights. The application relates to the Government of B.C. providing $25.5 million for the Surrey School District to purchase a future Redwood Heights elementary school site.

In May 2020, Council endorsed Corporate Report R079 which concluded the plan process and approved the final Stage 2 Redwood Heights Plan.