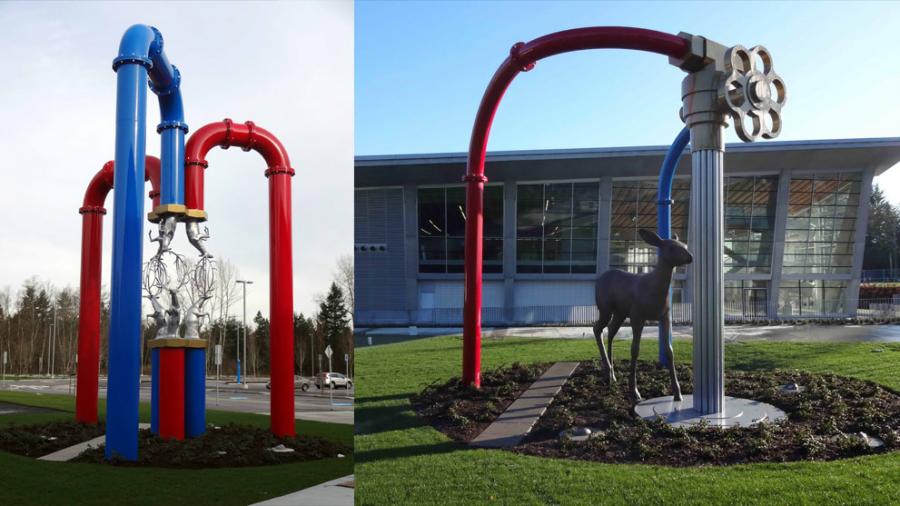 Circulation is a monumental two-part sculpture of deer that references the dual purpose of the Grandview Heights Aquatic Centre: family-oriented recreation and professional competition.

The sculpture facing 168 Street consists of a pair of pipes coming out of the ground that attaches to a faucet. A chromed pipe extends from the faucet in what appears to be a stream of water pooling on the ground. Drinking from the stream of water is an oversized bronze sculpted fawn. This animal, a traditional symbol of childhood and youth, illustrates the building’s recreational side that includes a 500 square metre leisure and lifestyle pool with a lazy river feature, waterslide, spray features, and tot’s area.

The sculpture at the entrance of the building from the parking lot appears as a stream of water gushing out of a pipe that rises from the ground. As people approach, however, they will realize that the running water is actually a dynamic assembly of six life-sized chrome deer with their horns entwined. The arrangement of these animals evokes the mirror-like effect of two powerful streams of water confronting one another, powerfully illustrating the spirit of competition in the building's 10-lane, 50m FINA-standard Olympic size competition pool with world-class diving facilities.

Water circulates in buildings, in the environment, and in our bodies. As the title suggests, Circulation is inspired by themes of water movement, transitions, and the human relationship to water as an essential element of life.

Cooke-Sasseville’s artwork is known for their uncommon use of familiar forms through strange but simple visual transformations. Since joining their practices in 2002, they have developed an approach that can be provocative and witty.

A notable example of their approach is Mélangez le Tout (Mix it All, 2011), which looks like a giant hand mixer. The artists have described the use of culinary mixers in their practice as a visual substitute for homogenizing forces. They recently completed a public art commission Le Passe-temps (2013) for Petite-Rivière-Saint-François and have done commissions for other towns such as Donnacona, L’Ancienne-Lorette, and Thetford Mines in Quebec.