This peaceful winter painting in City Centre Library is one of Gordon Smith's largest. 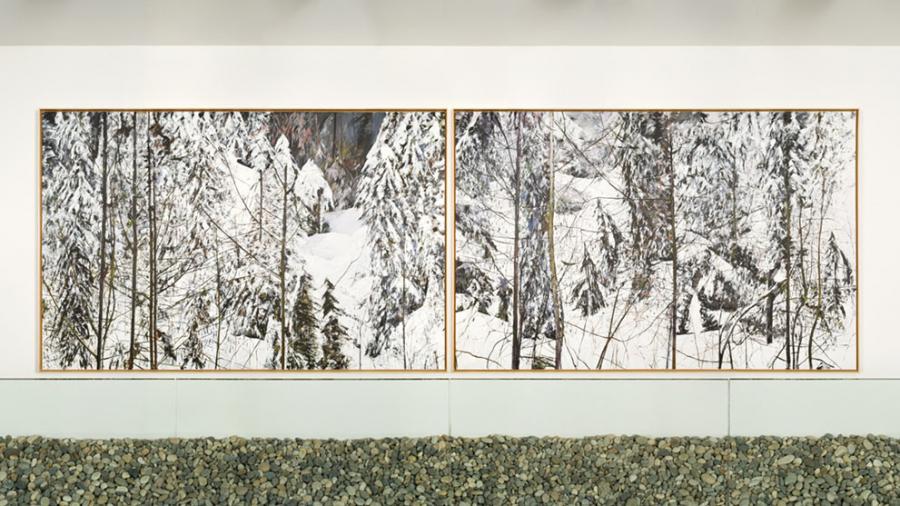 An expansive painting measuring 6’6” x 20’6”, West Coast Landscape was created specifically for the Surrey City Centre Public Library and is located near the entrance on the main floor. It is one of Smith’s largest creations. At first glance, the painting may seem to render a familiar scene. But upon looking closer, this monumental work does more than reproduce a scene from nature.

“You use ...[the landscape] as a starting point,” Smith says “and then the paint takes over.” Here colour and brushwork are as important as the suggestion of a wintry scene. The painted surface presents the artist’s detailed and passionate perspective of nature as a dense textural mesh of variable lines and modulated colours. The complexity of the layered, painted surface encourages viewers to consider the act of painting, variations in painters’ perspectives, and one’s own view of nature.

Like the library itself, West Coast Landscape creates a mood of quiet introspection.

More about the public artworks in City Centre Library

Gordon Smith, one of Canada’s most esteemed and prolific painters of west coast landscapes,
is also an accomplished printmaker who has worked in sculpture, photography, printmaking, and sculptural installation. His work is found in many public and private collections in Canada, the United States, and Britain. In addition to his acclaimed art career, Smith is a generous teacher and arts patron, and has received many honours and awards, including