Relive the exhiliration of Canada's ice sporting history through this collage-like mural in the Surrey Sport and Leisure Complex. 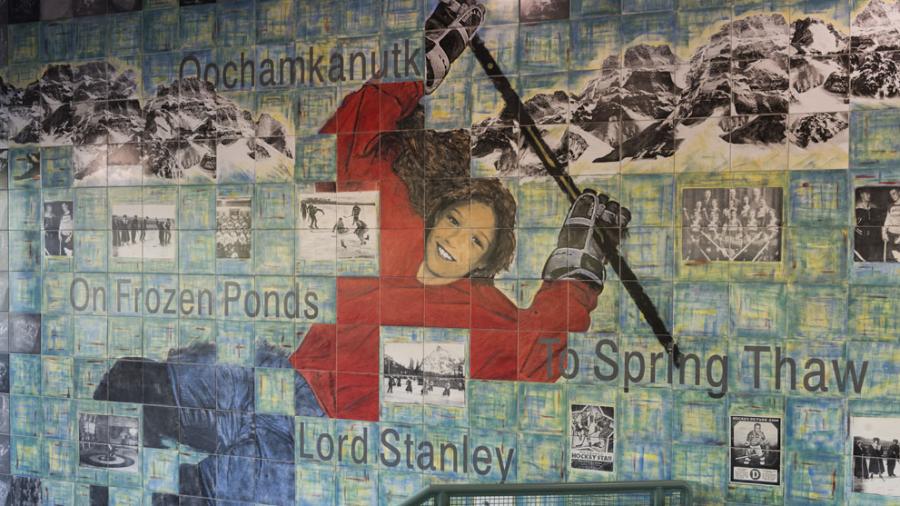 About From Frozen Ponds

Using a similar approach to the artwork in the adjacent Aquatics Centre, From Frozen Ponds is a collage-like mural filling an entire wall of the arena. Focusing on the ice activities of today and days gone by, its central image features a twirling, smiling female hockey player spiralling down a staircase wall.

The historical images chosen by Williams evoke professional competition, and, in the artist’s words, the “spirit, history and exhilaration of the game.” Images culled from BC Archives and the City of Vancouver Archives depict Lower Mainland residents skating on frozen Lost Lagoon, and a team portrait of the Vancouver Millionaires, one of the first, and most famous, professional hockey teams. Images of women playing hockey emphasize the long, rich tradition of a sport often overshadowed by the male-dominated NHL. In fact, the game is now the fastest growing female sport in the country.

Also included are images of historically significant players like Frank “Cyclone” Taylor, who led the Millionaires to their first Stanley Cup victory, and photographs of other competitive ice sports, including curling and figure skating. The work captures the Lower Mainland’s enduring love of ice sports.

More on From Frozen Ponds

Vancouver-based artist Blake Williams is known for visual histories of communities. Queen Victoria Annex mural (1998), which he built with school children, is based on stories told by their parents and grandparents of childhood games. His 12 x 40 feet ceramic mural of Rick Hansen’s Man in Motion Tour can be seen at General Motors Place. Williams has also worked with 150 North Vancouver residents to produce 330 ceramic tiles for Valley Stories at the Lynn Valley Community Recreation Centre.

His other public artworks in Surrey include A Million Summers and All Intertwining.