This wooden sculpture at Surrey Central by Marianne Nicolson and John Livingston imitates a pipe. 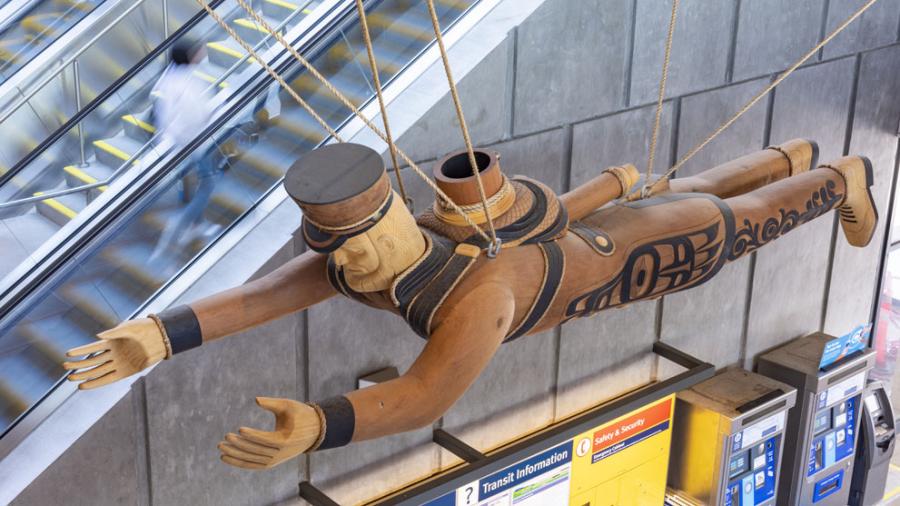 About The Sea Captain

Hanging from the roof of Surrey Central station, this large wooden sculpture was inspired by a pipe from the early 19th century, carved by an unnamed master from Haida Gwaii. Many First Nations of the Pacific Northwest Coast carved representations of colonial peoples they encountered when European, British, and American ships sailed there to trade. Portraits of colonial peoples were also incorporated into Kwakwaka’wakw imagery and ceremony.

The Sea Captain considers the history of travel and immigration to the coast. By privileging the Indigenous vantage point, this sculpture acknowledges the vision and agency of the First Nations who chose to appropriate the newcomers’ imagery and integrate it into their own productions. As such, it privileges the First Nations as observer.

The figure imitates the function of a pipe with the bowl positioned inside his backpack. The artist says, “This symbolism reminds us that the creation of a homeland on these coasts relies heavily on the peaceful and honourable negotiations between arriving and existing peoples, as well as with the land itself.” The figure stretches out his arms in a gesture of giving or receiving.

Marianne Nicolson (‘Tayagila’ogwa) is an artist of Scottish and Dzawada̱’enux̱w First Nations descent. Her training encompasses both traditional Kwakwa̱ka̱’wakw forms and culture and Western European-based art practice. She has completed a Bachelor of Fine Arts from Emily Carr University of Art and Design, a Masters in Fine Arts, a Masters in Linguistics and Anthropology, and a PhD in Linguistics and Anthropology at the University of Victoria. She has exhibited her artwork locally, nationally, and internationally as a painter, photographer, and installation artist; has written and published numerous essays and articles; and has participated in multiple speaking engagements. Her practice engages with issues of Aboriginal histories and politics arising from a passionate involvement in cultural revitalization and sustainability.

John Livingston (1951–2019) was born in Vancouver and then moved to Victoria early where he developed a life-long interest in Northwest Coast native art and culture. He began a carving and design apprenticeship at the Royal British Columbia museum in 1965 under the tutelage of the late Henry Hunt and his son Tony Hunt, who formally adopted him. Livingston is a master wood carver and has worked on many large totem sculptures. His primary medium is wood, but he is also known as an accomplished painter and has released over fifty limited edition prints. He is noted for his expertise in the restoration, replication, and appraisal of native artifacts.