These four sculptural forms in City Centre Library invite you to read, lounge, study, and sit on their surfaces. 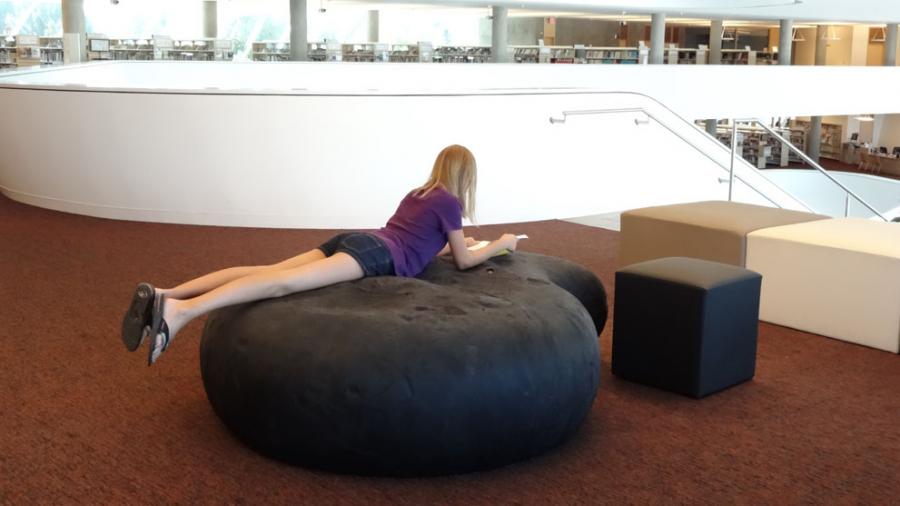 Liz Magor’s four sculptural forms titled Marks are installed in a group of three on the third floor and a single piece on the fourth floor of the City Centre Library. These large silicone forms look abstract at first, but seen from above, they resemble punctuation marks. As we move between them, we become part of the narrative of the library: the story of people coming together in a public place to pursue solitary acts of reading, studying, or researching.

The quotation marks also “record” the many stories of a diverse community. Made from black silicone, they are warm and soft to the touch, and are shaped by impressions of the human body—hands, legs, elbows. They offer a surprising contrast to the clean white architecture of the library, and welcome readers to lounge on their surfaces.

More about the public artworks in City Centre Library

Liz Magor is one of Canada’s most highly acclaimed and distinctive sculptors. She has represented Canada internationally including the Venice Biennale and received many honours and awards, including the Governor General’s Award in Visual and Media Arts and the Audain Prize for Lifetime Achievement. Her work includes public art in Vancouver, Edmonton, and Oakville, and widely exhibited sculptures and photographs.