Under the Double Eagle and Elder Moon 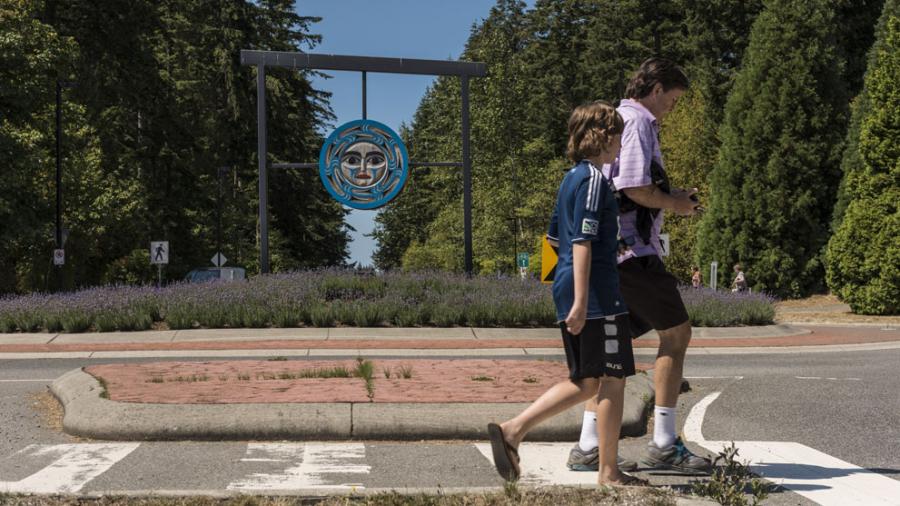 About Under the Double Eagle and Elder Moon

Under the Double Eagle and Elder Moon link Semiahmoo Coast Salish culture with other First Nations and Surrey communities. The sculptures, which are two large, upright cedar disks mounted back to back, are installed on the traffic roundabout at the South Surrey Recreation & Arts Centre, near the Semiahmoo First Nation community. Their circular design alludes to traditional Coast Salish spindle whorls and speaks to a history of art-making distinctive to the region.

Rich with symbolic meaning, Under the Double Eagle shows two eagles with wings touching and symbolizes the friendship between the Semiahmoo First Nation and the City of Surrey. It also evokes the Surrey Eagles Hockey Club, which plays in the nearby arena.

Elder Moon alludes to the Coast Salish “13 Moons” yearly cycle, which provides guiding principles for social and ceremonial life. Each of the moons symbolically represented in the outer rings is associated with a story and a time of year.

More on Under the Double Eagle and Elder Moon

Leonard Wells is a member of the Semiahmoo First Nation. He carves jewellery, masks, rattles, bowls, as well as monumental sculptures. He apprenticed with Haida artist Robert Davidson and has collaborated with Susan Point (Musqueam/Coast Salish).

His other public artworks in the City of Surrey include Eagle and Salmon, kw'enalien, and Welcoming You.

Leslie Wells is an artist of the Semiahmoo First Nation who creates carvings, paintings, jewellery, and prints. He has apprenticed with Haida artist Robert Davidson, assisting him on a house post that now resides in White Rock. In 2008, Wells graduated from the Northwest Coast Jewellery Arts Program at the Native Education College in Vancouver led by Kwakwaka’wakw/Haida artist Dan Wallace. His work is often described as having a “quiet spirituality."

His other public artworks for the City of Surrey include Eight Salmon Heads.