These drums by Brandon Gabriel and Melinda Bige tell the story of the seasons according to the Kwantlen First Nation. 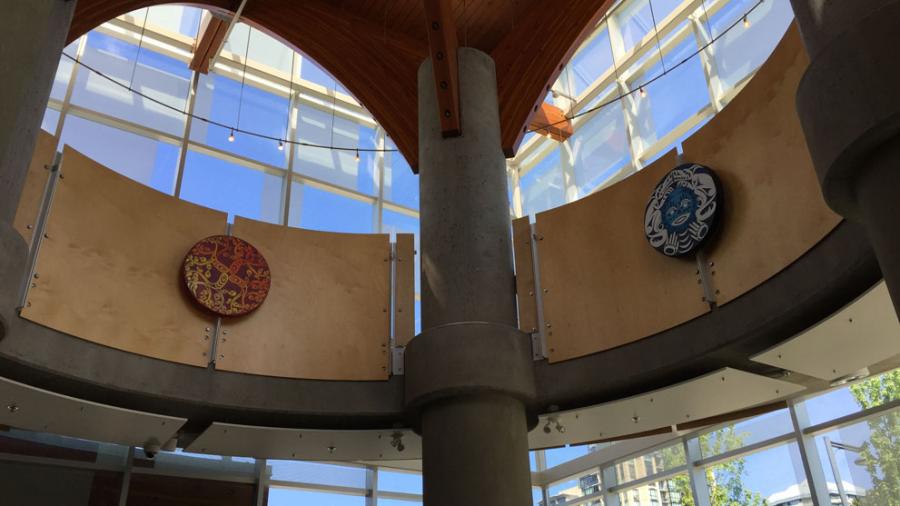 These four 30" buffalo hide drums hang in the circular mezzanine above the lobby of the Chuck Bailey Recreation Centre. Painted a different colour with original Coast Salish designs, they represent spring, summer, fall, and winter, telling the story of the four seasons, according to the traditions of the Kwantlen First Nation.

Four Seasons was commissioned by Seyem' Qwantlen Business Group to celebrate the culture and history of the First Nations peoples whose traditional and unceded lands include the Fraser River's south bank area, where the Chuck Bailey Recreation Centre is located, as well as the village of qəyqə́yt along the Fraser River, near the neighbourhood now known as Bridgeview in Surrey.

This artwork was presented as a gift to the City of Surrey from Lehigh Hanson Materials Limited, the project sponsor. The drums were unveiled as part of a ceremony organized by the Kwantlen First Nation and supported by Lehigh Hanson and the City of Surrey, in honour of the history of the qəyqə́yt village and the ancestral territories of the Coast Salish peoples.

Read a transcript of Brandon describing this artwork

His other public artworks in Surrey include Raven and the First Sunrise and Four Seasons.

Melinda Bige is Brandon’s life partner and collaborator. She is of Lut’sel’ké Dené heritage and is an accomplished scholar, activist, and artist. She is completing a graduate degree in indigenous governance at the University of Victoria. Brandon and Melinda have a daughter named Jamie, born in March 2016. She is now an instructor at Kwantlen Polytechnic University.