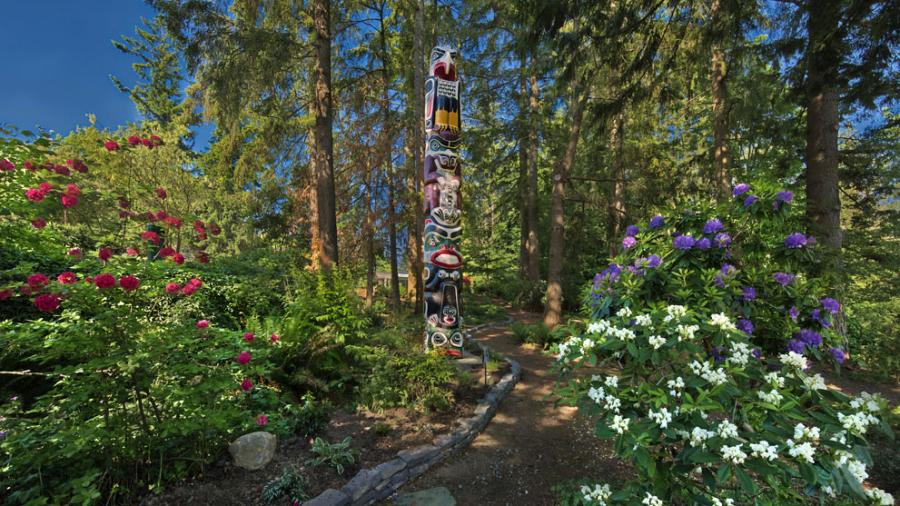 The Surrey Columbian Centennial Totem Pole stands eight metres tall in the grounds of Surrey’s old City Hall and is one of the oldest artworks in the collection. It is one of four poles raised by readers of the Columbian chain of local newspapers at the time as a tribute to the local First Nations during Canada’s centennial in 1967. The three other poles are located in Coquitlam, Burnaby, and New Westminster. Together, these artworks are an example of a community-generated commemorative project.  An indication of the changing attitudes towards First Nations people, the pole was erected to “preserve the art and legends of the Salish Indians.” It was added to the Surrey Community Heritage Register in 2004.

Kwakwaka’wakw carver John Edward Neel (known as Ted) made the wooden pole in the tradition of his people. The finely carved pole contains four figures, from top to bottom: Eagle, Bear, Beaver, and Frog. The colours used to decorate the carving are distinctly Kwakwaka’wakw, employing bright “paintbox” colours as well as the traditional red, black, and teal colours.

John Edward “Ted” Neel is a Kwakwaka’wakw carver, son of the well-known carver Ellen Neel. He is also named on the back of the Coquitlam pole.