This laser cut panel by Phyllis Atkins and Shain Jackson was inspired by cancer patients. 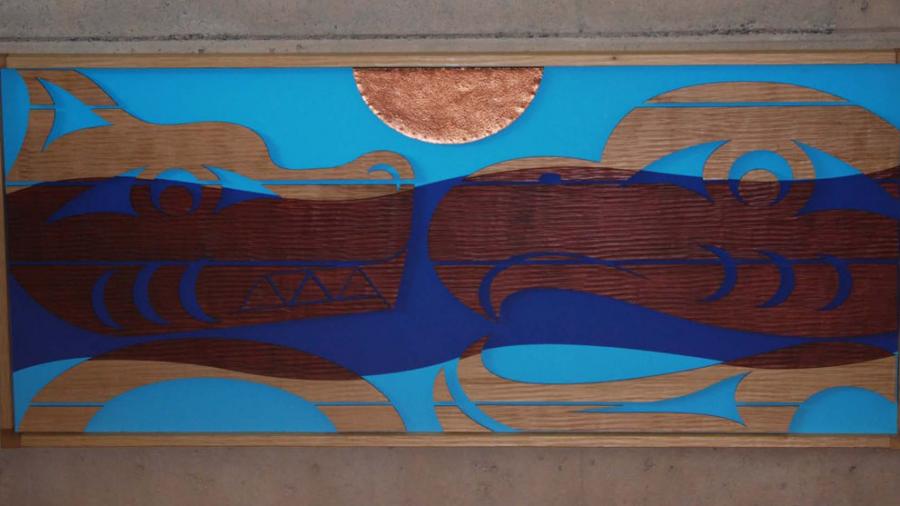 About Courage, Strength, and Family

This laser cut panel made of red and yellow cedar is inspired by the place where the artwork hangs—at the BC Cancer Agency–Fraser Valley Centre. Each of the six regional cancer centres display two pieces of art—one by First Nations artists and one by Métis artists. The purpose is to create a safe, welcoming cultural space for Indigenous patients and to reflect on the traditional unceded territory on which the Centres sit.

Designed by Phyllis Atkins and fabricated by Shain Jackson, the artwork depicts two creatures under a copper sun. The Wolf represents family and appears on the Kwantlen First Nations family crest. The Eagle represents courage, strength, and wisdom. This animal is sacred to Kwantlen First Nations because it flies higher than any other bird and is closest to the sun. It is also believed that the eagle carries prayers to the Creator.

Atkins writes, “It was important for me to acknowledge and honour all of the people who have cancer and attend the cancer clinic. There are many forms of cancer and affects each person differently, but the one thing they all have in common is to fight! Each battle is different as well, but each person with cancer has the courage, strength and family to help carry them through and to let them know that they are not alone.”

Phyllis (Qwoy’tic’a) Atkins is a Kwantlen First Nation artist whose name means. “I wear the clouds like a blanket” or “Shrouded in clouds.” Her name comes from the Nɬeʔkepmx language and it was given to her by her maternal grandfather Hereditary Chief Anthony Joe of the Shakan Band (Thompson River People). The artist is also part Sto:lo (People of the river).

Atkins has taken oil painting lessons from Barbara Boldt and hand-carved silver jewelry lessons by Master Carver Derek Wilson. In 2005, her and her husband Drew Atkins established their home-based business in Fort Langley, Kʼwyʼiʼyʼe Spring Salmon Studio, where they create both traditional and contemporary Coast Salish art, specializing in custom orders. They have an art gallery just outside of their home and welcome the public to visit by appointment.

Her other public artworks for the City of Surrey include Paddling through the Waves of Change, Returning to the River and We Are All Connected to This Land.

Shain Jackson is Coast Salish from the community of Sechelt. After years devoted to the legal profession, Shain has taken a break to follow his passion as an artist. Artistically, Shain works in Coast Salish design.
Currently, Shain is the President of Spirit Works Limited, an Aboriginal owned, operated, and staffed company focused on the design, production, and distribution of Aboriginal artwork such as jewelry, bentwood boxes, paddles, and so on.

Shain has always taken very seriously his responsibilities not only to his own community, but to the urban Aboriginal community at large. Further to this, through his company Spirit Works, Shain has developed programs aimed at providing employment and training to Aboriginal youth; donates space, equipment, and expertise to Aboriginal artists in need; consistently donates time and artwork to numerous charitable organizations; has designed and facilitated workshops aimed at providing cultural teachings for at-risk Aboriginal youth; and much more.