The Train Arriving at the Station

This tile mosaic celebrates the White Rock seaside through the decades. 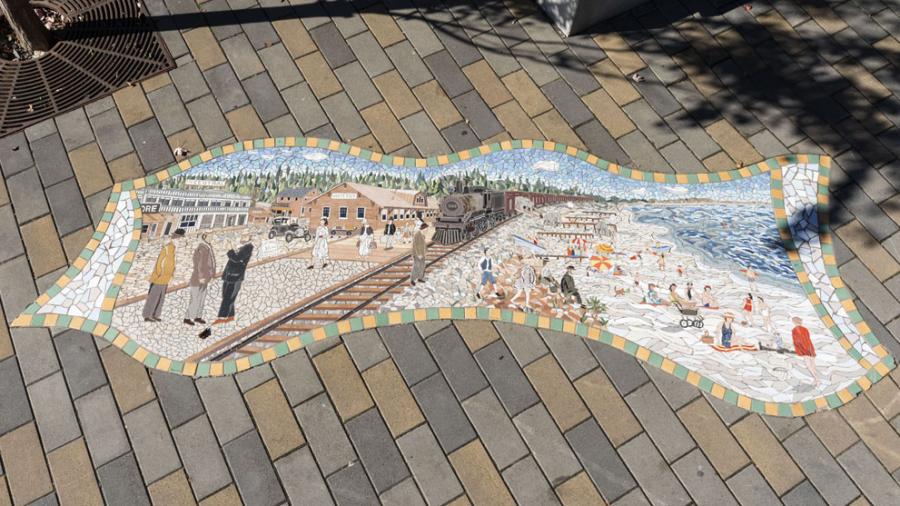 About The Train Arriving at the Station

This tile mosaic artwork celebrates the White Rock seaside through the decades. It is based on archival photographs from White Rock’s early settler history. The original train tracks through White Rock and the Semiahmoo Peninsula were completed in 1909 and have remained ever since. The railway played a significant role in enhancing access and spurring growth of the White Rock and Crescent Beach areas.

White Rock’s favourable climate, as well as its beach and pier, have made it a popular seaside destination for well over a century. Andersen depicts a bustle of activity in his mosaic. On the left, a group of men talk near a sign advertising cottage rentals. In the middle, a train pulls up to the station (which is now the White Rock Museum & Archives). Many trains passed through the area in the town’s early days. A few of these trains, like in this image, were circus trains en route to another city. Children were amazed the odd time the veterinarian would allow an elephant to stretch its legs on the beach, which became something of an annual event for a few years.

Passengers exit the train on the left side of the artwork. Some make their way over the tracks to join the throngs of people on the right. Swimmers, boaters, surfers, and sunbathers all line the beach—a scene you still see today during the warm summer months!

Glen Andersen is a Vancouver-based sculptor and mosaic artist. After studying film at Simon Fraser University, he shifted directions and committed himself to making what he describes as “accessible, human-scale, handmade pedestrian-friendly” public art.

He is best known for his mosaics, which he has created on his own and in collaboration with community groups. Andersen’s art may be seen in parks, plazas, school grounds, residential neighbourhoods and private gardens throughout the northwest.

His other public artworks in Surrey include Pebble Mosaics and Were It Not For You, also found in Holland Park, and Semiahmoo Trail Mosaics.