This monumental sculpture by Robert Davidson stands at the entrance to Harvard Gardens. 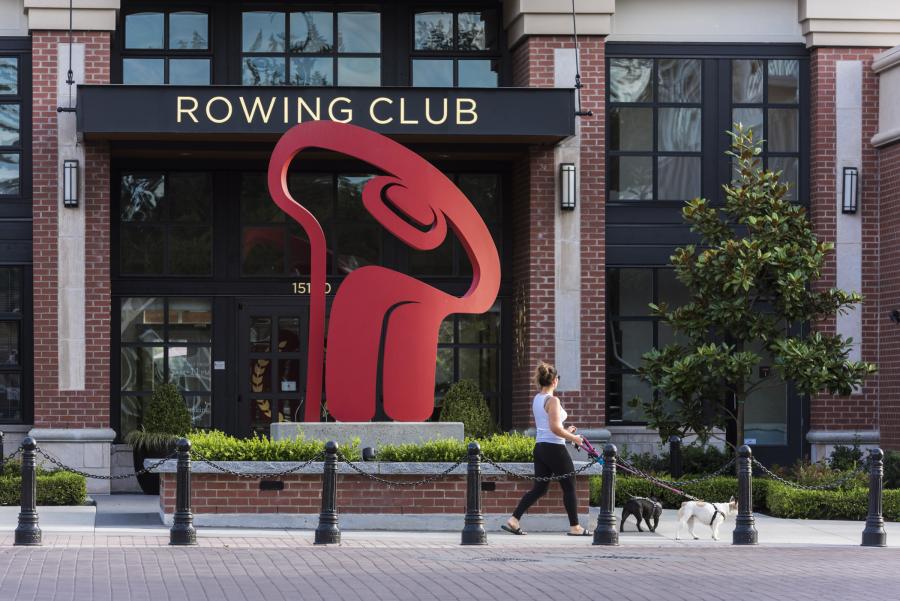 Loaned to the Surrey Art Gallery while the Harvard Gardens development was completed, Supernatural Eye is a monumental sculpture that measures almost three metres in height. Its graceful contours and bold colours combine the traditional visual iconography of Haida art with a contemporary aesthetic. Davidson’s inspiration was the many supernatural beings that dwell in Haida Gwaii.

Davidson worked first from drawings. He then subtly manipulated cut-out cards before moving to prototyping the piece in different materials, sizes, and colours. Made from aluminum cut by a water-jet process, this sculpture’s thick curved planar form evokes the cut-outs used in making appliquéd blankets. This work’s sculptural design is innovative in its reliance on form and line and its use of negative space to create the image of the eye.

Supernatural Eye is the second edition of a similar work currently in the collection of the National Gallery in Ottawa.

Robert Davidson is one of Canada’s most important visual artists. A Northwest Coast native of Haida and Tlingit descent, he is a master carver of totem poles and masks. He works in a variety of other media as a printmaker, painter, and jeweller. Davidson has received many honours for his accomplishments, including:

His work is in the National Gallery of Canada, Royal British Columbia Museum, and the Vancouver Art Gallery. Davidson lives in South Surrey and Haida Gwaii.

His other public artwork in Surrey is Eagle Calling.