Raven and the First Sunrise 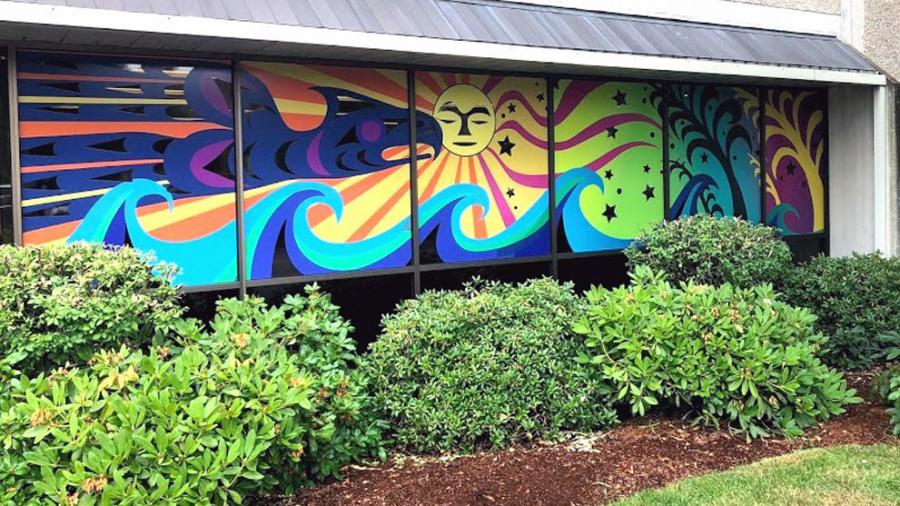 About Raven and the First Sunrise

Gabriel’s colourful design for the Guildford Library windows depicts the First Nations story in which the raven brings sunlight to the earth. The artist tells the story below:

There are 37 distinct and diverse Indigenous languages in present-day British Columbia, and many more dialectal groups within those languages. This also means there are as many variations of this story as there are Indigenous histories in these lands. The Kwantlen people share their story of the first sunrise with several other Coast Salish communities and within the hən̓q̓əmin̓əm̓ language group, which includes the Musqueam, Katzie, Kwikwetlem, and Kwantlen peoples.

The story takes place in a time beyond our understanding of time, in an era that precedes human habitation of this world, when life on this planet was in its infancy and light itself was still forming. Many supernatural creatures with powers beyond our understanding were hard at work shaping the world as we know it today. A shapeshifter now known as Raven, who could change size, shape, and matter, was gifted with the task from X'als (The Creator) to bring light to a darkened world, and so Raven did. The first sunrise was brought to the earth and sunlight beamed across the land, giving way to much needed illumination for all living things. Humans were still humble beings back then and had not developed into the industrious, manipulative, and highly populous people they are now. Raven also gave the humans the first constitution for looking after the planet and all living things: health, happiness, humbleness, forgiveness, family, generosity, and generations.

His other public artworks for the City of Surrey include Four Seasons.