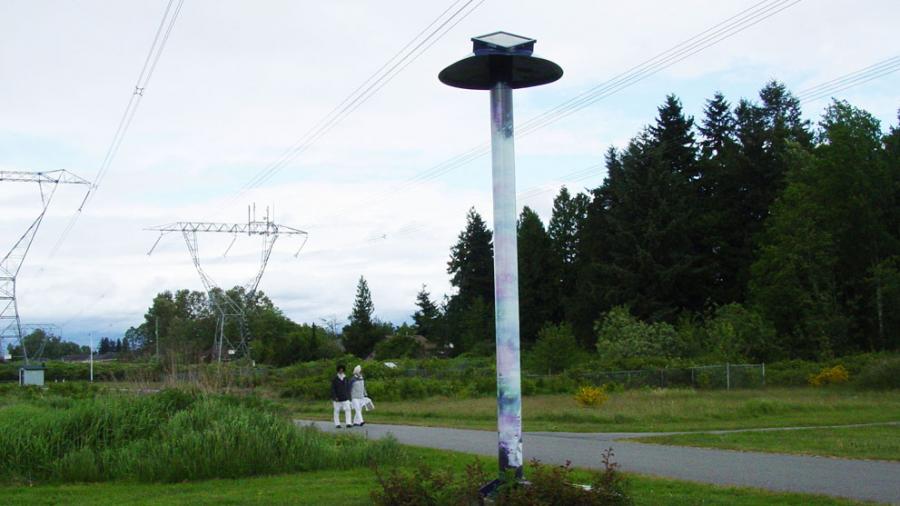 Talking Poles, located on both sides of 68th Avenue at the Serpentine Greenway in Surrey, commemorates a community dialogue project that transpired over the spring of 2009. The two steel poles stand 4.2 metres tall and are emblazoned with symbolic imagery and words, denoting “peace” and “love” respectively, in languages used throughout the Newton community: Arabic, Chinese, Spanish, Hindi, Korean, Punjabi, French, and English. Also included are iconic First Nations symbols representing these terms, and their translations into binary code, in order to represent the role digital technology plays in contemporary human life.

The artist team conceived of the Talking Poles project as a means to galvanize a sense of community in the particular area of West Newton in which it is situated, by inviting local residents to express themselves via storytelling. This ethos lends itself to the name of the project, which refers to the talking stick, an item used in Indigenous speaking traditions in order to impart importance and respect upon whoever holds it.

Before her involvement in community-oriented and public art activities, Lorna Boschman established her reputation as a leading video artist whose works have been shown at festivals internationally. She directed a National Film Board documentary titled “This Ability”, which grew out of a community-based media program for adults with cognitive disabilities. She is passionate about digital literacy and in 2014, launched the East Van Digital Literacy Project to empower and engage individuals in her community.

Victoria Moulder is an artist, researcher, instructor, and designer who has participated in numerous public art projects and community-based cultural initiatives in Canada, the United States, the United Kingdom, and Taiwan. She is passionate about the synthesis of art and science research and has been involved in a number of large-scale projects under the umbrella of interactionart.org. Locally, she has worked with the Vancouver Board of Parks and Recreation, AIDS Vancouver, and the Public Dreams Society, among others. Visit her website.

T'Uy'Tanat-Cease Wyss is of Skwxwu7mesh/Sto:Lo/ Hawaiian/Swiss ancestry. She is a media artist with close to twenty-five years' experience. She has focused her art practice on community, health, and healing projects and has been mentor in her field for close to fifteen years. She is also an ethnobotanist, traditionally trained by Indigenous elders. Her work involves site-specific and culturally focused teaching with storytelling as her means to sharing knowledge.