The Meeting of Mind and Body

Rediscover the Greek legend of Daedalus who invented wings to fly in this responsive public artwork in the Guildford Recreation Centre. 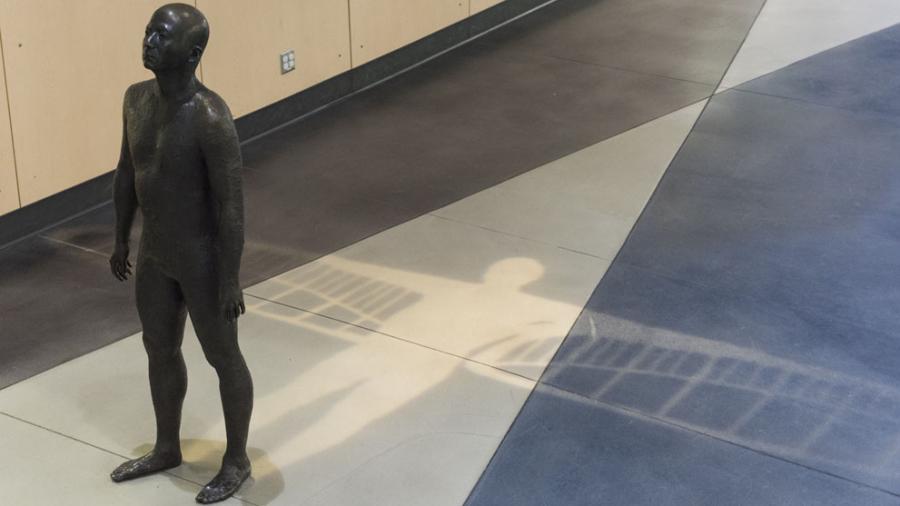 About The Meeting of Mind and Body

This multimedia installation symbolizes the story of Daedalus, the legendary Greek figure who invented wings to fly.  A set of wings suspended above the ground represents Daedalus. As a craftsman, Daedalus would have created many statues of kouroi or young men. From the floor, a bronze statue of a kouros, a youth representing everyman, looks up with longing.

The works are connected at the base of the kouros’s feet by a beautiful projected reflection of Daedalus in flight. A moving Gobo light projection of the figure flies across the dark blue walls accompanied by faint sounds of beating wings. The motion of people on the running track above triggers the flight path of the moving silhouette.

More on The Meeting of Mind and Body

Nancy Chew and Jacqueline Metz are visual artists and have worked collaboratively since 1997. They are also known as Muse Atelier and their work is centered on the public realm. Their practice explores ideas of nature and culture and how we position ourselves within the world. Much of the work reflects on perception, on re-contextualizing the familiar or iconic, on how we mythologize the world around us. Acclaimed for their simplicity and elegance, artworks by Nancy Chew and Jacqueline Metz can be found in cities across North America.

Their other public artworks in Surrey include Still Point/From the Centre Outwards, Tree of Knowledge, and water's edge.