This Haida totem pole by Mungo Martin greets travellers coming into Canada from the United States. 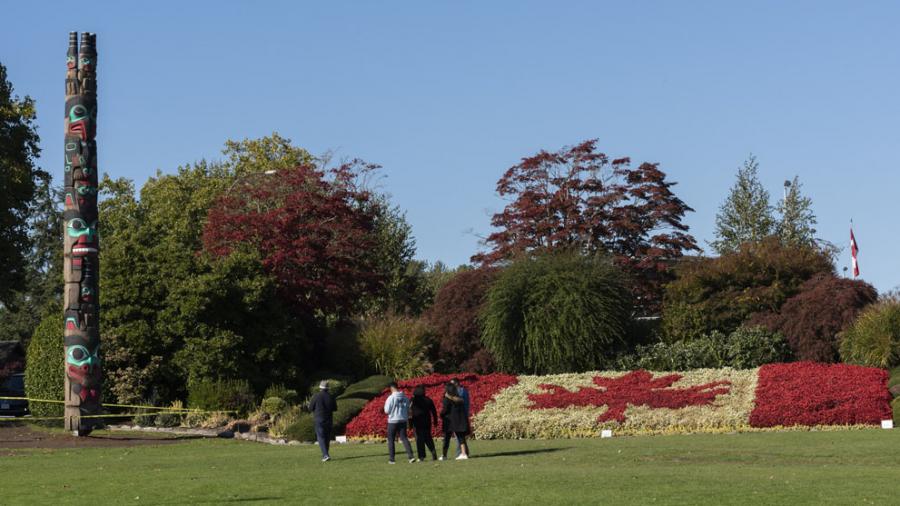 This totem pole greets travellers coming into Canada from the United States. It stands almost 9 metres tall and is over one metre wide. Designed by Kwakwaka’wakw chief carver Mungo Martin, the pole is a replica of a traditional house front pole from the ancient village of Skedans in Haida Gwaii. Skedans was largely abandoned around 1890 after a devastating smallpox and measles outbreak several years prior. Another Haida name for the village is Huadju-lanas, which means “Grizzly Bear Town.” Many totem poles in the village depict grizzly bears. Some still stand there in varying states of decay.

The Royal British Columbia Museum commissioned Martin to create this replica pole. Prominent Haida artist Bill Reid assisted him. The museum’s documents report that they acquired the original pole from the people of Skedans in 1954. The pole plays a significant role in preserving and continuing Haida culture.

When first installed in 1957, the pole stood next to the Peace Arch Park visitor centre. When the provincial government opened a new visitor centre in 2008, the pole was removed. The Semiahmoo First Nation persuaded the provincial government to restore and raise it again. On September 28, 2018, the pole was re-erected at its new location in the park’s flower garden. Conservator Andrew Tod preserved and repainted it according to Semiahmoo, Kwakwaka’wakw and Haida culture and traditions.

Mungo Martin is one of the twentieth century’s most distinguished Kwakwaka'wakw carvers. He was born in 1879 in Tsaxis (Fort Rupert) on Vancouver Island. Following the death of Martin’s father, his mother married the gifted carver Charlie James. Under James’s tutelage, Martin developed his artistic skills along with a profound understanding of traditional Kwakwaka’wakw culture. He applied this knowledge to design, carving, painting, singing, and songwriting. Between 1952 and 1962, he created replica poles as well as new poles for Thunderbird Park next to the Royal BC Museum in Victoria. He sent others poles around the world, including the Centennial Pole presented to Queen Elizabeth in 1958 to commemorate the 100th anniversary of the founding of British Columbia. This pole stands in Windsor Great Park near London, England.