Enjoy this community project of mosaics and a mural inspired by nature at the Fleetwood Community Centre and Library. 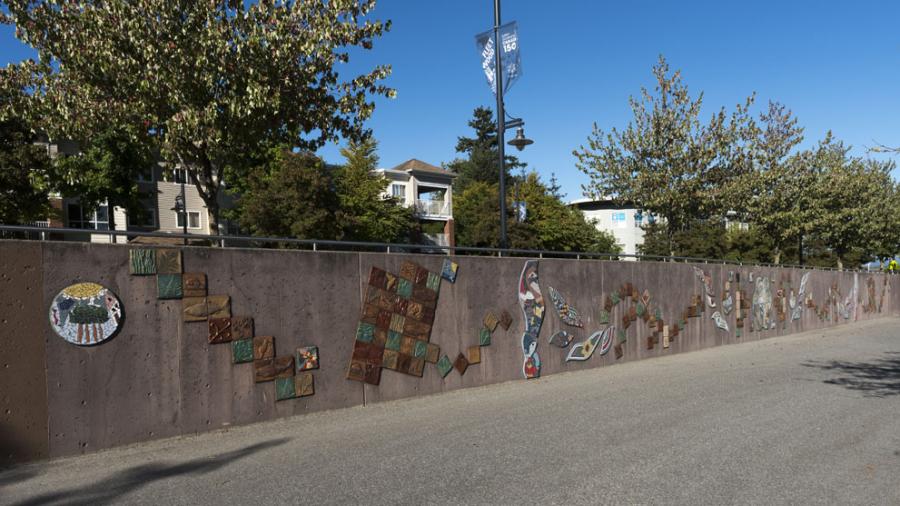 About Fleetwood Mosaics and Ceramic Mural

The mosaics and the tiles are installed in rhythmic patterns running the length of a large retaining wall at the Fleetwood Community Centre and Library. Intriguing free-form shapes composed of tiny mosaic pieces are interspersed with arrangements of the more formal tile shapes. Many of the tiles are embossed with images from nature, such as ferns, wildlife, trees and portraits, while others are imprinted with writing, organic shapes, and even the tiny footprints of a dog.

Claudine Pommier is the Executive Director of the Arts in Action Society. Through this organization, Claudine has conceived and organized projects ranging from Recalling the Future/Art in Contemporary Africa, a documentary completed in 2000, to Canada/Mexico Exchange that created a mural for the University of Cuernavaca, Mexico, as well as several large-scale collaborative murals in Vancouver.

Jane Cameron is the artistic director of several mosaic projects including the Living Footprints Project and the Historical Walking Tour Project through Carnegie Community Centre.