This sculpture in bronze and granite honours fallen RCMP officers in British Columbia. 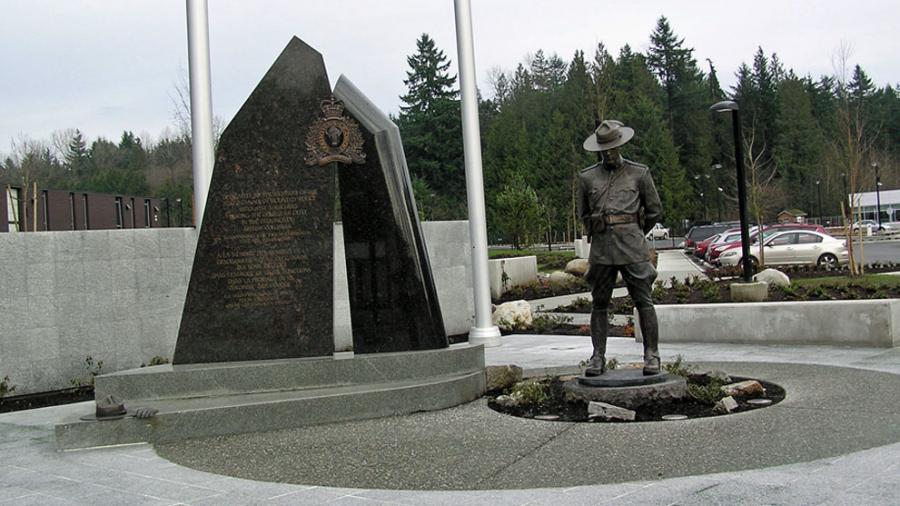 This monument to fallen RCMP officers in British Columbia is composed of multiple parts: an officer in repose, two slabs with a bilingual inscription and an RCMP badge between them, and a pair of gloves and Stetson hat lying on the granite steps leading to the slabs.

The bilingual inscription reads “Dedicated to the members of the Royal Canadian Mounted Police who lost their lives during the course of duty in the province of British Columbia.”

The bronze sculpture of the officer is two metres high. Behind him, tall prairie grasses grow, reminiscent of the RCMP’s prairie origins in the 1870s. The shape of the granite slabs bearing the inscription represents the Rocky Mountains—an iconic presence in British Columbia. The bronze badge is an emblem of the RCMP and the hat and gloves represent the officers on a more personal level.

Originally installed in Vancouver, the sculpture was moved in 2013 when the BC RCMP Headquarters (E Division) relocated to its new home in Surrey.

Madeleine Vrignon has a Bachelor of Fine Arts from the University of Manitoba and lives in Winnipeg. She primarily creates sculptures in bronze and stainless steel and has made two other bronze and granite monuments for the RCMP. Many of her works can be found in St. Boniface Sculpture Garden and Assiniboine Park’s Citizens Hall of Fame featuring busts of famous Winnipegers. Vrignon  also produces conceptual design for signs, illustrates books for children and adults, has served as an engraver for Brunet Monuments, and taught art at Collège Béliveau.