This poem engraved in English and Korean on a rock in Bear Creek Park Gardens reflects on the theme of water. 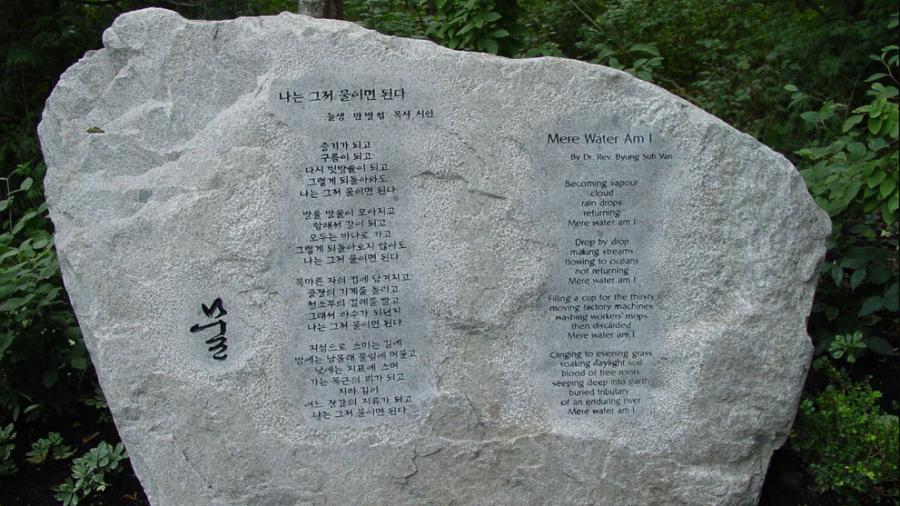 Poetry Rock consists of a large piece of raw granite engraved with a poem composed by Surrey resident Dr. Rev. Byung Sub Van. A distinguished Korean-Canadian writer and theologian, Rev. Van composed the poem titled “Mere Water am I”, which is inscribed on the rock in both Korean and English.

The poem addresses the universal theme of water in its many forms, from raindrops to rivers to oceans, and through its many uses, from slaking thirst to producing power for factories. At the same time, the work uses the metaphor of water to celebrate social unity and cultural diversity. The work is a gift to the people of Surrey from Rev. Van, his family, and his sponsors.

Dr. Rev. Byung Sub Van was from South Korea and was ordained there as a minister. He received his Master’s degree in theology in Kyoto, Japan in 1968 and moved to Canada in 1970. In 1987, he earned a doctoral degree in theology in San Francisco Theological Seminary and also became a permanent resident of Surrey.

He has written hymns and published a dozen books of prose and poetry in the Korean language, for which he has received numerous literary awards. In 1992, he founded the Vancouver Korean Writers Society and has been very active in the Korean-Canadian community. An earlier poetry rock by Rev. Van was installed at VanDusen Gardens in 1995.