Kwomais: A Place of Vision

This large mosaic representing the four elements of earth, air, water, and fire greets you at the entrance of Kwomais Point Park. 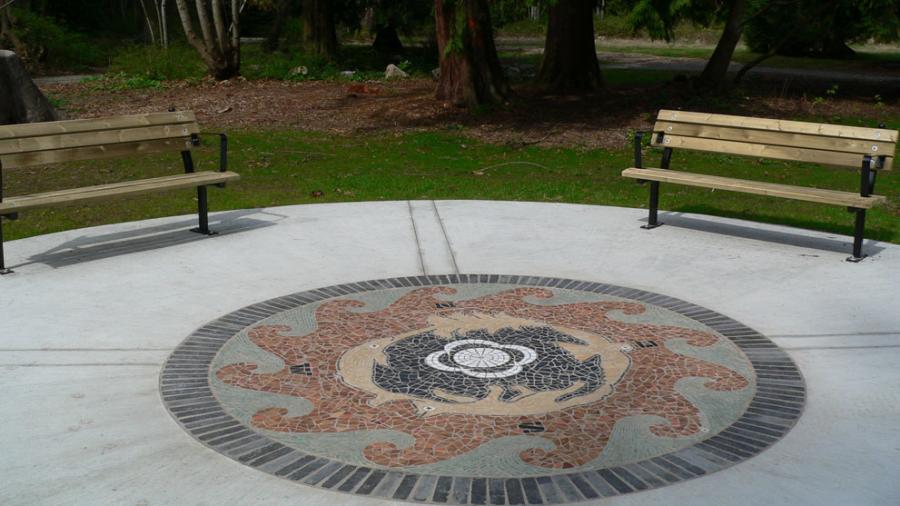 About Kwomais: A Place of Vision

This large mosaic work illustrating the four elements of earth, air, water, and fire is found at the entrance plaza of the Kwomais Point Park. The ouroboros, a symbol of the eternal circle of life, inspired the circular design and suggests constant transformation. The mosaic creatures refer to guardians or guides welcoming visitors to the park.

Kwomais Point has historically been a place of vision, community, and spirituality. The Semiahmoo Straits Salish people, who first occupied this land, believe it is imbued with guardian spirits, ancestors, and stories of transformative animals and humans. In 1910, a Methodist Church met on the site, and in 1925, it provided a gathering place for the United Church. More recently, a labyrinth of fieldstones was constructed, which is believed to balance the body and soul as it directs walkers to the centre. The plaza mosaic has been designed based on this history to make connections between the land, its creatures, and people.

More on Kwomais: A Place of Vision

Connie Glover, an accomplished ceramic artist, has taught and exhibited for many years, gaining particular recognition for her large-scale public artwork. Her residencies and research have taken her to Alberta, California, China, and Japan.

Deborah Putman, a professional visual artist, has exhibited her paintings in Canada and internationally. A graduate of Concordia University in Montreal, she furthered her studies in BC, Nova Scotia, and France.