This large-scale photographic artwork on the Operations Centre changes with the wind. 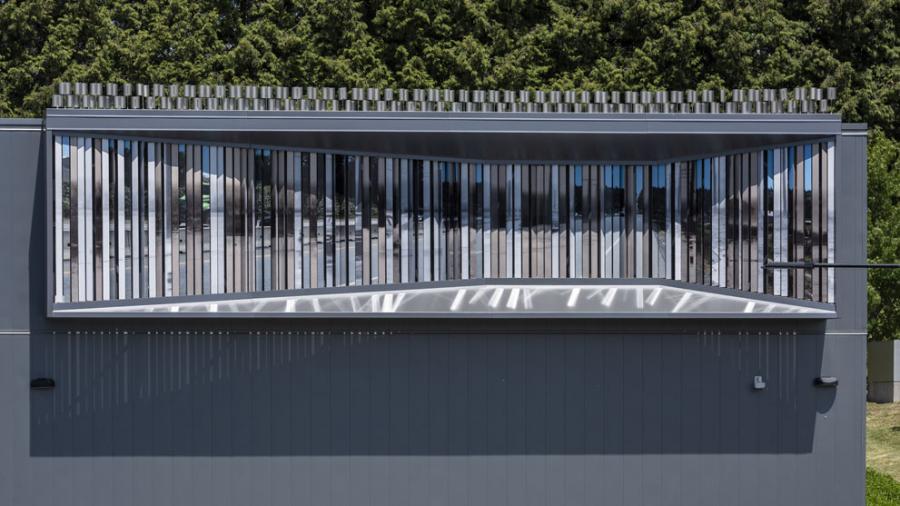 The three photographs depict the same intersection, all taken along 176 Street (Pacific Highway 15) near 40 Avenue. The sepia print from 1935 and a black-and-white photograph from 1965 were found in the Surrey Archives during Storey's residency at the Operations Centre. The third is a colour photograph taken by the artist in 2015. Together, the photographs reveal how the city has changed over the past eighty years. They also pay tribute to the important work by staff of the Operations Centre, such as improving infrastructure on routes previously prone to high levels of flooding, as seen in the first two images.

The photographs are mounted on 103 three-sided vertical prisms. When the wind blows, the prisms rotate, combining a different version of the landscape with every turn. Storey says, "Having some outside input causing random action within the work is a theme in my practice."

Once a day, the random turning could be made to stop by a bank of electromagnets. If the wind is blowing at that time, the prisms could potentially line up, causing the artwork to form a complete image. This represents the one hour a day when Operations Centre staff meet before dispersing to their work sites across the City. If chance allows, the keen observer would see one image in its entirety. Otherwise, pieces of the past and present combine to depict a truly timeless and constantly changing landscape.

Sign of Signs mimics the shape and proportions of the Operation Centre's distinct architectural form featuring triangular sections made of wood on each side of the building.

Alan Storey is one of Canada’s most celebrated artists and has been creating kinetic sculptures for over 30 years. One of his most iconic artworks is Broken Column, the swinging pendulum located at HSBC’s downtown Vancouver building. Storey’s intention is "that a work of art in the public realm should intrigue and engage a passerby into an exploratory investigation of the content and its relationship to the surrounding site."

His other public artwork in Surrey is Out of Thin Air.