This flock of aluminum birds hanging from the ceiling of Surrey's City Hall are a graceful and powerful symbol of democracy and freedom. 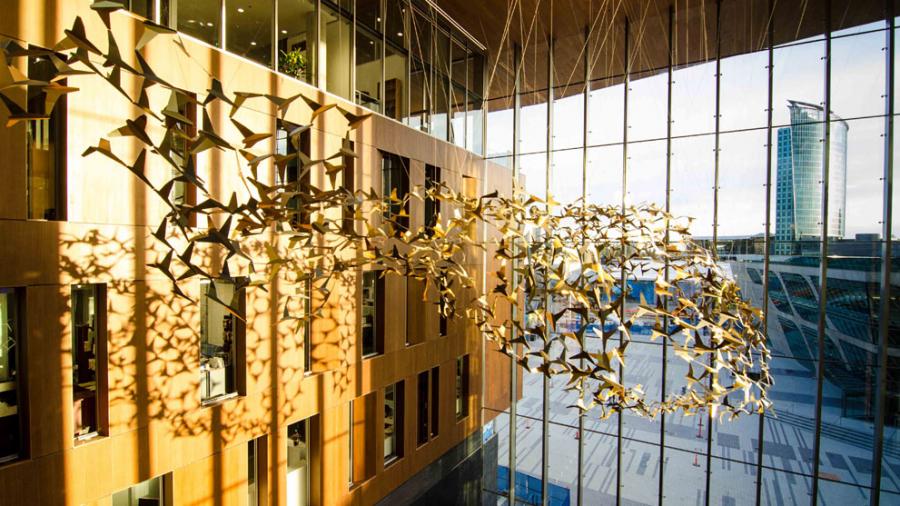 Surrey's City Hall features an artwork inspired by the theme of democracy. The lead artists took their inspiration for the planned artwork from the behaviour of animals, who work collectively to ensure their survival. Studio Roso said, "As a way of conveying the theme of ‘democracy,’ we have worked with a conceptual analogy of democracy—a flock of birds."

Approximately 800 aluminum birds are suspended from the roof of the building's six-story atrium. Within the atrium's glass walls and skylights, the flock of birds appears to be flying through the building. At night, a special lighting system adds to the effect of the sculpture's dynamic movement. Measuring over 20 meters long and almost as high, this sculpture is one of the most impressive public artworks in Metro Vancouver. Many who have seen the artwork's proposal drawings have commented that the image of flying birds is an international symbol of freedom.

The artists, Sophie Nielsen and Rolf Knudsen of Studio Roso, understand what it means to be a citizen of the world. Both are Danish and have lived in other countries prior to setting up their current operation in London, England. Both are graduates of the Royal College of Art MA in Design Products.