This artwork by Leslie Wells on the Surrey Arts Centre windows honours the salmon in Bear Creek. 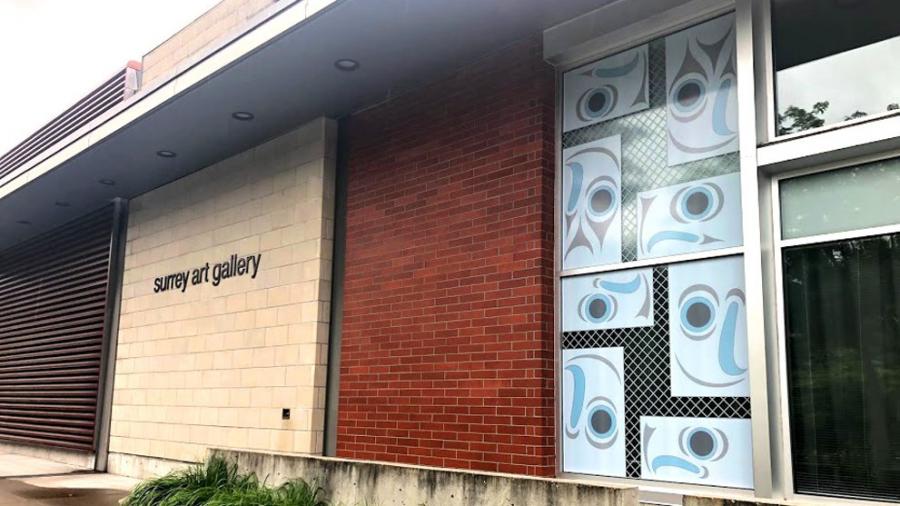 Wells has depicted the salmon in a repeating, rotating pattern, creating a dynamic effect as if they are swimming through a strong current. The circular movement suggests the mysterious and wondrous life cycle of these fish that migrate to sea and return to their natal streams to spawn, bringing with them vital nutrients to sustain wildlife and healthy river ecosystems.

In his drawing transferred to vinyl, the artist uses Coast Salish design elements of circles, crescents, and trigons (a pinched triangular shape), and calls upon his print- and jewellery -making background for the crisp, precise lines.

Leslie Wells is an artist of the Semiahmoo First Nation who creates carvings, paintings, jewellery, and prints. He has apprenticed with Haida artist Robert Davidson, assisting him on a house post that now resides in White Rock. In 2008, Wells graduated from the Northwest Coast Jewellery Arts Program at the Native Education College in Vancouver led by Kwakwaka’wakw/Haida artist Dan Wallace. His work is often described as having a “quiet spirituality”, a quality expressed in his design for the Surrey Arts Centre program room windows.

His other public artwork for the City of Surrey includes Under the Double Eagle and Elder Moon with fellow artist and brother Leonard Wells.