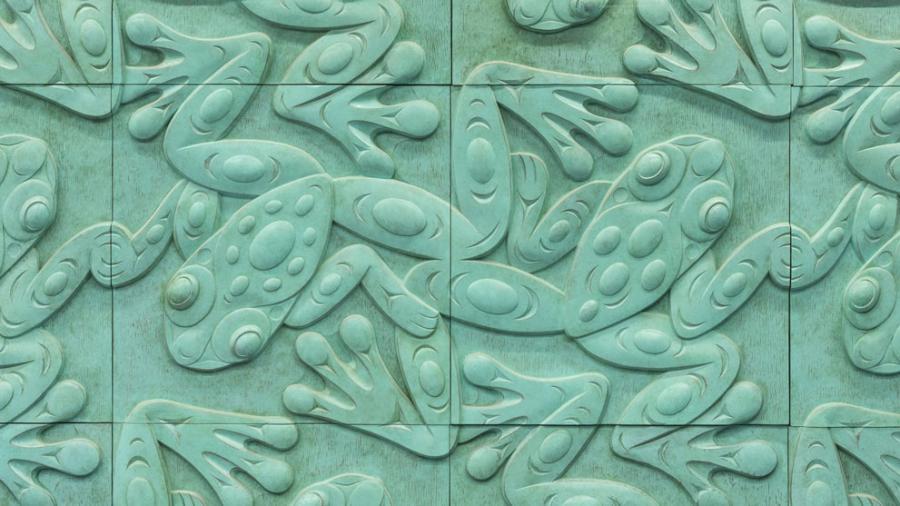 Susan Point designed and carved a Coast Salish style frog specifically for the South Surrey Recreation & Arts Centre. Panels adorn the wall of the lobby with an interlinking pattern that is repeated in a way that suggests it can go on forever.

Point writes: “In many First Nations groups, the frog is the voice of the people. It symbolises innocence, stability, and communication. The voice of the frog heralds the coming of spring, and in environmental circles, the frog is metaphorically considered the ‘canary in the coal mine’, its silence indicating the first signs that the environment is suffering. The frog is also a playful image, which I believe has an appeal for all age groups . . . By using this kind of universal image, I hope to create a focal point for the community, something which will draw people to this facility and enhance the sense of pride which they feel in their community.”

Susan Point is a descendant of the Musqueam people. Her striking and distinctive art in the Coast Salish tradition has achieved worldwide acclaim. An innovator with a strong personal style, she expresses both ancestral concepts and contemporary concerns in new mediums such as glass, paper, bronze and steel, as well as more traditional wood. Point is an Officer of the Order of Canada, and has been presented with the Queen Elizabeth II Diamond Jubilee Medal for her contributions to Canada.

Her other public artwork in Surrey is Water Guardians.