Mandala After a Prayer Wheel

Welcome to the new surrey.ca 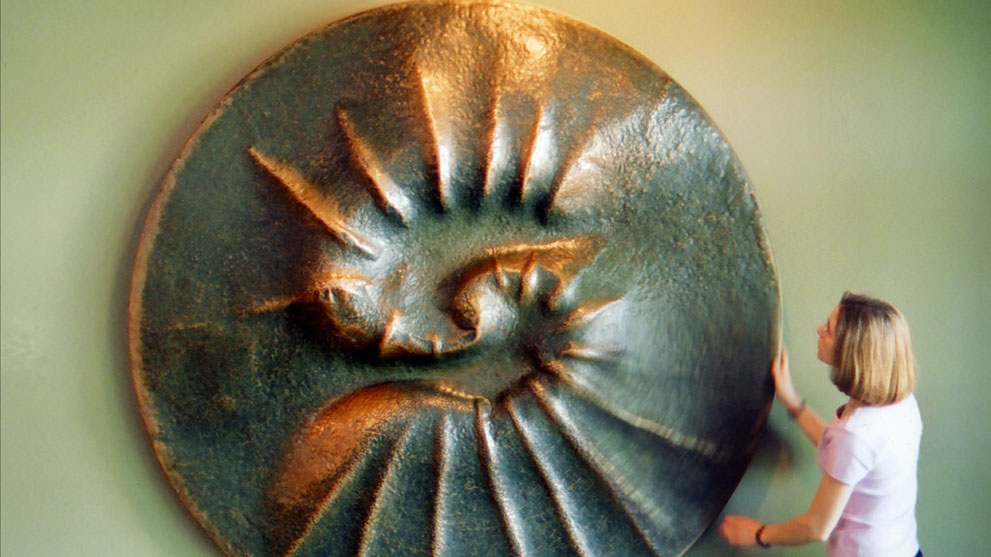 About Mandala After Prayer Wheel

This circular sculpture made of pounded sheet copper is the oldest artwork in the City of Surrey's Public Art Collection and a favourite as people are invited to spin it!

Measuring almost two metres across, Mandala After Prayer Wheel is inspired by the Tibetan prayer wheel, a Buddhist symbol of good fortune. Both monks and laypersons turn those wheels to spread blessings and positive wishes. The wheel, which has no beginning and no end, is believed to attract Perfection and Peace, key concepts of the Buddhist faith.

A raised spiral pattern appears to advance when the wheel is spun in one direction and to recede when spun the opposite way. The artist enlarged the form of a handheld prayer wheel to a grand scale so people entering the lobby of the Surrey Arts Centre can see this whirling illusion. Unsurprisingly, Mandala After Prayer Wheel is almost constantly in motion.

More on Mandala After Prayer Wheel

Maurice Van Der Beke was born in Belgium in 1939. He attended the Royal Academy of Fine Arts in Ghent where he won the prestigious Delvigne Prize and had a number of solo exhibits across the country. An extensive traveller, he has lived in Afghanistan, India, Nepal, and Germany and has worked in various careers including as a commercial pilot. Now retired, he lives in Langley and runs a honey bee farm.